John tells a story of, early in the tour, a band member overhearing two Aberdonians in the lobby after the show:

“What did you think of that?”

“Ach, it could have been worse”. 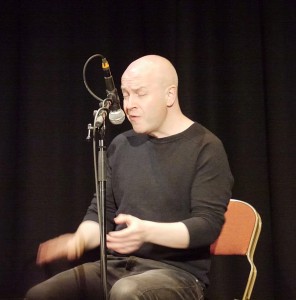 In the beautiful Victoria Hall, part of Saltaire’s model town, built by Titus Salt to house his mill workers, the hall is Victorian but without any ostentation, in keeping with the industrialist’s world-view. It has a sprung dance floor and when the band cuts loose, the foot-tapping sets it going. Shame they don’t cut loose more. Tonight is a seated gig, in keeping with the tone of McCusker’s new album, a mix of jigs, reels and ballads, leaning heavily on the ballads. They open with Calendar Boys, as the album does, with open hand knee slaps and claps and travelling through four tunes. 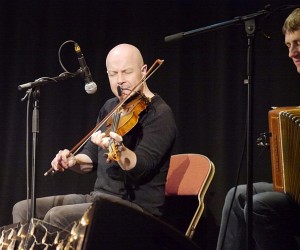 The tale is told of Eddie Reader’s Trip To The Mall, where she ended up in a shopping centre instead of onstage, inspiring a tune. There are many tales and dry jokes tonight, setting the tone for a pleasant evening out. That’s what the crowds here come for – a good night out. They don’t care about the hits, the big tunes, the new album – they want good music, well played. This is where it starts to go wrong for John. The audience know what they want but John hasn’t the confidence to give it to them. Instead, in a failure of nerve, he intersperses the fiddle tunes with songs from Adam Holmes, who opens with a dull song and some dull solo strumming. It’s a shame – the rest of the band is stellar. Andy Cutting on accordion just won Musician Of The Year at the Radio 2 Folk Awards, Innes White plays lovely guitar, understated and precise, while Toby Shaer handles flute, fiddle, whistle and harmonium. Andy’s lovely slow waltz, “The Lovely Lindsay Barker” comes with a story and is followed by a question: “Do any of you feel like singing? Well,….. please don’t it’ll put us off a great deal”. Adam has another song, a country beat-led “Come Out Drinking” that passes just fine, before the band get back with Under One Sky. 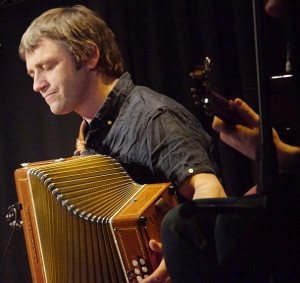 The pattern is set and fast tunes follow slow ones, which follow songs, generally a bit mawkish, from Holmes. Unfortunately Adam is outclassed musically, his singing isn’t clear and most of his songs aren’t up to much; the highpoint of each comes when he drops out and the band takes over to extrapolate. John himself is a multi-instrumentalist, playing fiddle and harmonium tonight, casting his eye about to cue the band members in. He has worked with the great and good and is in demand as an accompanist as well as producer. The instrumental playing is rich and deep, often with the counterpoint of flute and fiddle, and I wonder why the mood is broken so often with songs that don’t fit this tradition. Why weren’t the songs featured as a support act, where they could be taken or left, instead of fleshing out the main act to two sets but spoiling the mood? 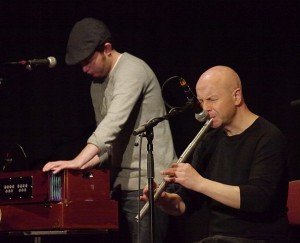 The last tune of the evening is a long fast one and the audience reaction show that this is what they wanted – the hall echoes to feet and claps. Why weren’t they given more of what they wanted? Given the plaudits his instrumental album gained, I’d encourage John McCusker to trust that the people who bought it are confident to take on a whole evening of something similar.