There’s no shortage of cultural curiosities on offer in Glasgow on the evening of November 5th. In the East End of the city, Celtic take on a team from Norway in European competition. WWE’s brand of professional wrestling is on show at the cavernous Hydro. Somewhere across the city, Protomartyr are blasting out their fantastic new record. Even though the official Bonfire Night Fireworks display has been moved to another date, various illuminated rockets whizz and pop into the foggy, dreich sky. We slip into tonight’s venue, The Hug and Pint. It’s my first time here. It’s not your bog standard gig venue. They’re serving pan-Asian vegan food and organic wheat beer. There are skateboards emblazoned with the artwork from Mogwai albums on the walls.

It’s a small place. I thought it was small until we went downstairs to where the show would take place. If there was a cat around, I would have saved it a few bumps and not even bothered swinging. The stage, as it is, is less than a foot off the floor. There’s a small table in the corner selling cans out of an ice bucket. And we’re just in time for tonight’s exhibition.

I say ‘exhibition’. The Jenny Hval live experience is a bit different from your usual common garden gig, the age old ‘singer backed by band plays new album and The Hits’. This is more of an art performance than a simple reproduction of the songs found on the incredible, unsettling ‘Apocalypse, girl’. Hval slips on to the stage wearing a velour sweat suit and pink wig, sits down on a small yoga ball…and then gets her iPhone out. There is utter silence. We are so close to the stage we can nearly hear her thumb swiping the phone screen. It feels awkward, like we the audience are invading her privacy. Eventually synths and a laptop crank into action, introducing the abstract found sounds that make up new album opener ‘Kingsize’. The track is a spoken word piece, Hval acting every word and at one point humping the yoga ball against a wall. Afterward, she explains this was so that those at the back of the room could see her. The between song chat tonight is a highlight; Hval is wry and humorous, prone to overthinking but engaging. There are stories of a bus tour on a previous visit to Glasgow and supporting Swans here last year. 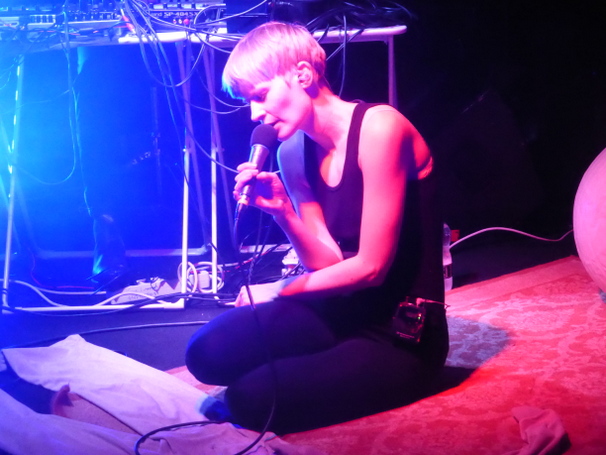 As the performance goes on, Hval slowly sheds items of clothing. She’s wearing black lycra underneath the sweat suit. Most of the new album is aired tonight. Tracks like ‘Heaven’ show that Hval is an extraordinary talented singer, as well as a maker of some strange and unusual music. ‘Heaven’ is a hugely overwrought track, Hval’s closing howl mesmerising. At the breathy, calming coda, some guy exclaims ‘Whoa’. Someone else tuts.

‘The Battle Is Over’ is the most accessible track Hval has released so far. The performance tonight recalls prime time Beth Gibbons with a ‘Fitter, Happier’ Radiohead vibe. There’s a lengthy track about ‘travelling across America’, which comes across as a one-woman play. The compactness of the venue means we can see every emotion expressed up close. You feel you can make eye contact with the artist. Before another song, Hval is back sitting on her yoga ball checking her phone. She makes a brief reference to, I presume, dating apps before holding the phone against her microphone. It starts playing a recording of Hval singing Lana del Ray’s ‘Summertime Sadness’ while she sits looking passive. She bursts into life as another track starts up through the speakers. It’s nearly theatre.

By the closing track, ‘Sabbath’, Hval removes the pink wig she has been wearing. There are a few gasps from those who didn’t know otherwise. She arranges the now discarded sweat suit and wig into the shape of a body on the floor and kneels beside it for the songs ethereal climax of hiccupping breaths, like the recovery from a fever. It’s strangely affecting. A mesmerising performance.

‘Apocalypse, girl’ is out now on Sacred Bones Records