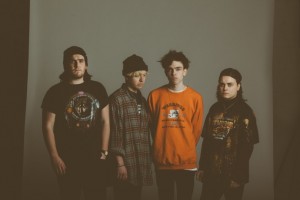 After a year that saw the release of their dreamy début album Be Slowly, Brummie Garage-pop quartet JAWS have announced their biggest headline UK tour to date this Spring.

Kicking off with their first ever appearance in Norwich at the town’s Epic Studios on the 3rd of March, the band will be calling in at a series of capacious venues aross the country including London Heaven (4th), Manchester Academy (6th) before closing out with a homecoming show at Birmingham’s Institute on the 7th March.

Bursting out of the B-Town scene alongside their contemporaries Swim Deep, Peace and Superfood, JAWS have surfed on its blissed out vibes and carved out their own distinct pop hooks submersed in a timeless 80s indie cool veneer.

Now with the songs of their 2014 debut album Be Slowly and its shimmering title track bolstering their already burgeoning infectious indie-pop single cannon, the relentless band will be looking to build on the success of their Autumn tour and win over bigger audiences in unfamiliar spaces with their sumptuous sounds.

For Fans of: Beach Fossils, Wild Nothing, The Church, The Cure, Swim Deep,

Listen to “Be Slowly” by Jaws:

Having met at Halesowen college in 2012, the band led by Connor Schofield wasted no time in releasing their demo track ‘Cameron’, a track that captured the laid back vibes of their studious setting and soon began to win over the online community.

Now, having barely entered their 20s (Drummer, Eddy Geach is still 19), the band have gone from success to success notching up a series of NME and Radio 1 celebrated singles including ‘ Toucan Surf’, ‘ Surround You’ and ‘Stay In’ in 2012 before the release of their acclaimed Milkshake EP the following year, saw them praised for their lush, swelling indie sound.

Unsurprising then, that it wasn’t long before the band found themselves discovering their own music as soundtrack to the most euphoric moments of dramas such as Made In Chelsea and glorious highlights of Match of the Day.

2014 saw the band announce their much anticipated debut album ‘ Be Slowly’ featuring lead-off single ‘Think Too Much, Feel Too Little’. The track offering a first glimpse of the more mature, refined sound to appear on the record, while simultaneously maintaining their signature wistful haze. Bringing together the romantic, wide-eyed swoon of new new-wave, shaggy slacker antics and melodies shaped by timeless guitar pop, it’s a blast of much needed sunshine while staying true to its contemplative and inward looking title.

The second single this year ‘Be Slowly’ – the title track from the album – sees JAWS doing what they do best; washed out, rollicking new-wave tinged indie rock, perfect for the festival tents the band will grace this summer. The video for the single was on heavy rotation at MTV Rocks in the lead up to the release, and received huge support from BBC Radio 1, BBC 6 Music, and was put on the evening playlist at XFM.

Alongside the singles that have defined the JAWS sound and established them as the formidable venue-filling, crowd-surfing prospect they have grown to, their debut album ‘ Be Slowly’ features eight brand new tracks that further speak to the groups accomplished and sophisticated song craft, tight knit dynamics and subtly insightful and affecting emotional depths.

The band embarked on their biggest UK headline tour to date in September to coincide with the release of the album with a near sell out success. In December saw JAWS open an ‘Academy’ tour (1500 – 3000 cap) twelve show run for The Enemy & The Twang across the UK.

also featured on Chickens are Dinosaurs.com

Latest posts by Chickens are Dinosaurs (see all)