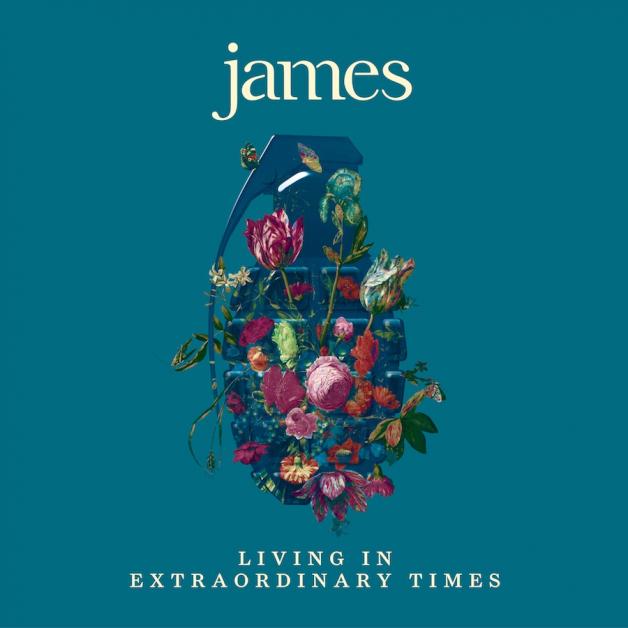 The Tim Booth persona projected through the music of the band James reminds me of a friend, a nice guy, interesting, hugely analytical, but a little standoffish, all of which seems to hide some narcissistic tendencies. Both remind me that deconstructing and scorning everything but standing in union with no-one can be a lonely place. ‘I missed your seventh birthday’ sings Booth on James new album ‘Living in Extraordinary Times’, ‘Facebook on Father’s Day… forever touring’. It is a touching song, written to a daughter. ‘I hope you understand?’ he says to his daughter. I don’t. Has he to be away when he has had the type of musical success you would assume allows mustering enough savings to be a live at home father. Or is there more of the story to be told? The music on this album is pacy. There are a lot of tinny beats, there is a lot of experimental percussion and racket, it veers towards indie rock but is intentionally far too discordant and broken to ever get there. There are influences from the eighties, the New Romantics, industrial electronic, Duran Duran from the early nineties and a tinge of the abstract stuff Radiohead were doing in the early 2000s. Generally the music seems secondary to the lyrics, although paradoxically the lyrics are often lost in the music. This is an album that requires a lot of attention. The end to one of the songs sounds and reads a lot like Beloved’s ‘Sweet Harmony’. Compare the lyrics. ‘There’s only one human race, many faces, everybody belongs here’ which is the end chorus to fifth track on the album Many Faces and ‘Lets come together right now, right here, in sweet harmony’ from Beloved’s hit. Tim Booth is of course Tim Booth, singing his heart out, getting it all of his chest, tender and soft at times. He’s often calling out to someone who has run away from him and hidden themselves in the mountains, perhaps he’s singing to himself in these moments. Booth continues to sing with the arrogance which suggests he has worked it all out. He has some nice lines about ‘bruised love’, ‘fucking love’ with the word fucking sounding like a metaphor for tired and defeated, which at least to me sounded like a celebration of commitment. Songs about personal relationships, with daughter or partner, seem somewhat incongruous though, in an album whose title and content is partly political. Of the political stuff I quite like the line, ‘We are reaching out for ecstasy forever whilst the bodies pile up face down in the beach’ a lyric inspired, I imagine, by the image and fact of the Syrian boy whose body was found face down on a beach in Greece. Its a lyric for the time, a time in which hundreds and thousands of desperate immigrants wash up on to beaches populated by people whose only concern is keeping themselves hydrated and topped up with sun cream. It sums up the human ability and tendency to focus on self and familial indulgence whilst psychopathically ignoring other peoples’ pain and suffering. There’s stuff about the States and stuff about immigration. Its nice to see people standing up and being counted, but I’m not sure that what James have created makes for a profound or memorable political piece, and like I said its one thing to be against something, against hate, against apathy, against dependency on social media, another to be for something.