These two CDs (or LPs) are all there is of Jackie Shane’s music. Still, that’s twice as much as anyone salvaged of The Shangri-las. Thanks to Numero Group for doing the archival digging. Partly a soul curiosity and set of deep cuts, partly a trip to a soul club in the seventies and partly a visit to a fabled place where Jackie could be what she wanted.

Jackie Shane, you see, was born in a man’s body but a soul diva through and through. Whether trousered or glammed up in perm and dress, Jackie’s photos suggest a stage queen. Her voice nicely straddles the range between a deeper grit and a naughty twinkle. Whether on her six singles or the live cuts, there is a strong soul presence, backed by a fine band. Perhaps she had to fight to be herself, I don’t know, but there is a feistiness in her delivery that suggests she was no stranger to standing up for herself. 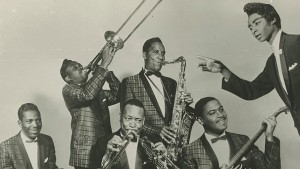 One disc highlights studio cuts, fine tracks from the golden soul era of the mid-sixies. So golden that good stuff like this might only attract local popularity – in Toronto. The other disc is the best of two nights of her stage show from 1967. It’s magic stuff. I can picture Jackie strutting the stage, daring anyone to even look at her funny. Commanding yet slightly camp, she lays down her rules for life in an extended workout on Money. She’s not afraid to shake her money-maker and cash is what wins her heart, despite protestations of a broken heart elsewhere in the catalogue.

Her band cooks and shows off frequently – listen for the times when the trumpeter plays two horns at once. Proper speedy, rug-cutting stuff alternates with slow-burners, this is a really fun historical document. Jackie disappeared from view in 1971, made a living and was only rediscovered as a musician after a lot of detective work from fans. This set is the first where she has approved the selection, not that there was a lot to choose from. You’ll know many of the songs, solid soul standards but you’ll enjoy the gutsy delivery and attitude of Jackie.

1 thought on “Jackie Shane – Any Other Way”