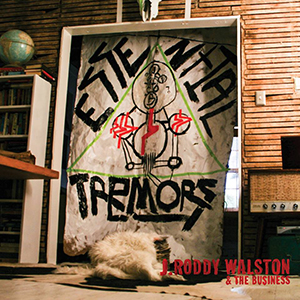 Essential Tremors is the third full length album, offering from the old school rock ‘n’ rollers, with a real feel of the Southern States.

For me, this album is like Physical Graffiti (Led Zeppelin) Come Around Sundown (KoL) and Dandy in the Underworld (T-Rex) rolled into one, modern record that constantly shifts from balls-to-the-wall-rock’n’roll to soulful country pop rock from track to track. (they are MASSIVE records to try and stand up against, they do alright).

When I read reviews of classic rock bands sounding like Led Zepplin, they just never seem to actually sound anything like them.

But if you know Zeppelin, you will know what I mean in regards to this record. This is modern pop-rock but with Jimmy Page guitar lines and developments, with the classic “Bonham room sound” / shuffle all over it.

J. Roddy Walston has something of a unique vocal style. He has a real husk, and gravel to his voice, that sounds almost painful at times, but also an undeniable control and range.

‘Black Light’ and ‘Same Days’ show them at their most T-Rex, whilst heavier tracks such as ‘Sweat Shock’ and the leading single ‘Heavy Bells’ shows Mr. Walston & co. re-embodying ‘Nobody’s Fault But Mine’ era Zeppelin, but with more of the late 60s proto-punk approach and energy.

‘Nobody Knows’ and ‘Midnight Cry’ show their most soulful moments, hinting at a real appreciation for Stax Records. ‘Boys Can Never Tell’ has something of an American Mumford and Sons, but with a hint of Wailers in there somehow.

For me, it’s when they go heavy that they’re at their best. But without the lows the highs are never as good.

If you like Two Gallants, The Sheepdogs, The Temperance movement, The Alabama Shakes, The Whigs, Led Zeppelin, T-Rex, The Kings Of Leon, The Weeks, Stax records, Vintage Trouble.