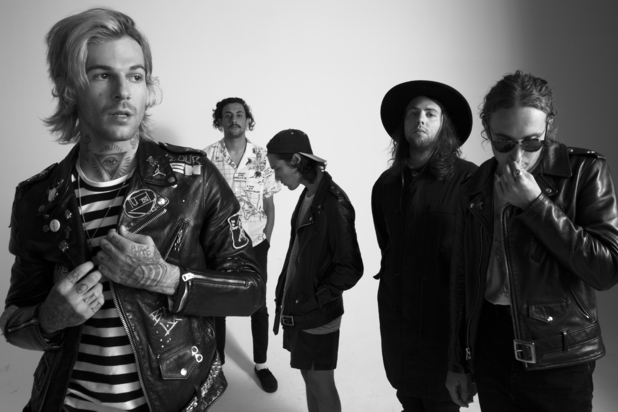 It’d been about a year and a half since The Neighbourhood last visited the UK for a string of shows, and judging by the queue stretching along Oxford Road in Manchester, it’s clear they’ve been missed. A strong demographic mix lines the streets outside the O2 Ritz with humans of all ages clad in all black clothing with upside down houses printed on every item of clothing you can imagine, and also on one fella’s face.

One of the benefits I hadn’t realised of being 6ft+ at a show of this variety, is that with the majority of the audience being made up -16 year olds you’re view is just fantastic wherever you’re stood. But enough about my sight lines.

With their second album Wiped Out! released in October 2015, the set opens with a handful of newer material including the album’s opening track Prey being the first tune to get the hands up and thankfully the phones down of the Manchester audience.

Frontman Jesse Rutherford‘s intoxicating charisma is present as ever as his slender figure glides around stage robed in a particularly aged 50 Cent t shirt, which judging by their colossal hip-hop influence in their material it’s not at all surprising. As an age old NBHD fan the old bangers are out it force from their debut album I Love You and even some of the EP’s preceding that. Baby Came Home 2, funnily enough the sequel to Baby Came Home is met with what’s possibly the loudest scream since the band enter the stage, and rightly so. It’s an incredible tune. If you haven’t heard it, go listen to it now. Halfway through you get kicked in the face by what I can only describe as a ‘sonic Dr. Marten’, and since I first heard it I couldn’t wait to hear it live. Slightly disappointingly, it didn’t translate. I’m just hoping the sound engineer was having a bit of a bad day, because it was generally a fairly shoddy sounding show.

Bad sound aside, what I appreciate about this show is that there’s just no messing about. No over-indulging in their own glory. No narcissism. Plain simple good vibes. The choice not to stick and encore in there was pretty refreshing, and like I said, no messing about.

What better way to close a show than with the big hitters Sweater Weather followed by R.I.P 2 My Youth. Major props to the lighting designer on the road with them, all evening the lighting has been a show in itself and never has it been more obvious than in these last two songs. Perfectly timed, programmed and executed, simply sublime.

After what seems like a fairly short set, the show’s over and that’s whats been the gain of this show. It was the same length of any other gig, but it only felt like 2 minutes. That’s The Neighbourhood.