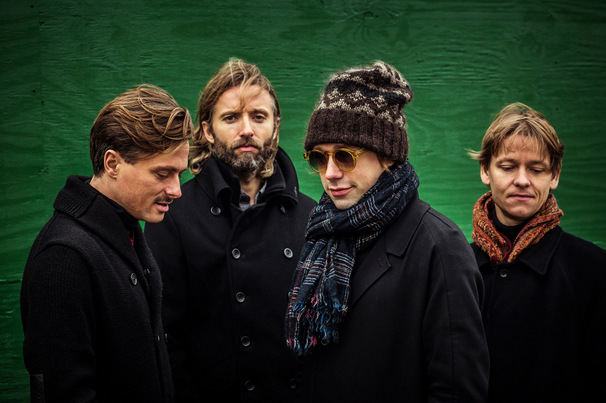 Mew are now a month on from the release of + -, their latest album and only the third in the previous decade. The album has been critically well received, and there is a buzz about the band right now. It’s fair to say that I’m excited to see them, expecting a packed venue and eager crowd prepared to welcome back a band with a well loved back catalog touring new material. Sadly only a few hundred people turn out for the show, creating a distinctly sparse feeling in a venue with a capacity of around thirteen hundred or so.

Perhaps the miserable Sunday evening weather is to blame for the lacklustre numbers. Perhaps it’s a deeper issue with the band’s image, or a systemic problem with the genre. Let’s face it, progressive rock was never cool the first time around, so what hope is there for it’s modern interpretation? It is within this context of resolute unhipness that Mew and their contemporaries operate. And after all, the band itself is guilty of the self indulgent excesses and pretensions ordinarily associated with progressive trappings; their previous album title was a twenty-three word long poem, and their current is two symbols with ambiguous intended pronunciation. Viewed through this lens, it is remarkable how warm, engaging and accessible their live performance is.

The band open with Witness, Satellites and The Zookeepers Boy, delivered in rapid succession with a breathless energy. The overall sound is full, incisive and forceful, the instruments well balanced. Mew create an interesting and complex sonic depth with surprisingly little, with Jonas Bjerre’s falsetto vocals riding high-pitched atop a wave of sound, all in front of a pulsing wall of light. The illuminated web strobes, flashes and dances along to the beat, mercifully lacking the pomp of pyrotechnic flares or oversized TV screens, and offers a pleasingly subtle and effective complement to the performance.

As with similar modern prog-rockers Muse and The Mars Volta, Mew’s delivery is technically excellent. Unlike these bands, Mew neither rely on thematic conceits and campy posturing, or indulge in experimentation with convoluted time signatures as a testament to their skill and craft. Instead, Mew present a performance of relatively simple but beautiful sounding rock and pop songs, rendered with elegant precision. As the set continues with Silas the Magic Car, The Night Believer, and Beach, this is both a blessing and a curse. The performance is so polished and smooth that it can’t help but feel as though it lacks some of the roughness and rawness that one would normally associate with a live rock act. The effect of this was to appear a little dispassionate, which seemed to subdue the crowd.

Mew take the opportunity to demonstrate their softer side in the middle portion of the set, which contained some of their more ethereal and dreamlike material. Performances of songs like Eight Flew Over, One Was Destroyed, Saviours Of Jazz Ballet (Fear Me, December), Louise Louisa, and Hawaii are graceful and haunting. While not going much out of their way in terms of audience interaction, the occasional gestures of thankful appreciation to the crowd conveyed a real humility and joy at having the opportunity to play songs they love. This was enough to endow the performance a charming and humble quality, rather than an air of self indulgence throughout these slower tracks.

At this point, something strange happens. Johan Wohlert speaks, openly acknowledging to the crowd that despite its age, the songs on Frengers are “pretty great”, and that they still love playing them. The crowd are then treated, as five of the final six songs (including both the set closer and the final encore) are from their popular breakthrough album. This pragmatic concession to nostalgia is greatly appreciated by all present, drawing the biggest and noisiest reactions of the night from the crowd. Mew hammer their way through Am I Wry? No, 156, and Snow Brigade, their classics rejuvenated for live performance with updated arrangements, rippling and frenetic. She Spider and first encore Water Slide bookend a brief interlude, before the evening ends on a spectacular high note as the expansive crescendo of Comforting Sounds closes out the set.

It is disheartening and slightly sad to see a band of Mew’s stature and talent unable to fill a modest sized venue in Glasgow. If you and are considering going to a Mew show and have the opportunity to do so, do not allow let the weather (no matter how inclement) to stand in your way.