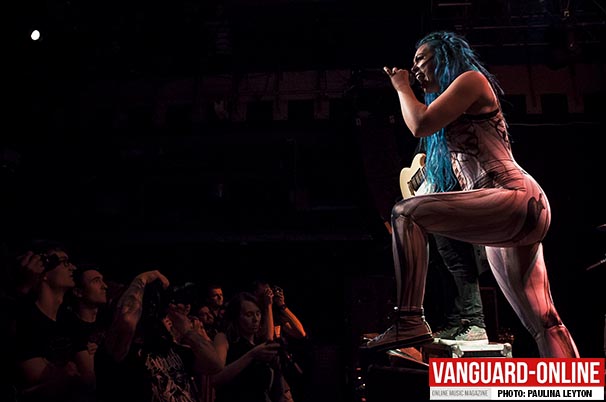 Sumo Psycho are an energetic “punk/dance/metal” quartet from Canada. With the album Lost In A Cyco City released  in 2014, they come to the UK to present us their second album Opus Mars to be released in 2017. The first single Anti-Anthem can be listened to and pre-ordered from their website.

Skye Sweetnam, aka Sever, is the frontwoman. Sumo Cyco provide mad entertainment and something to talk about in every show. Last night at The O2 Islington in London  Sever jumped from the stage, mic in hand, straight to the crowd, to mingle and sing with the audience. She made the entire ground floor of the venue an extension of the main stage. She drove the security guy crazy, he spent most of his time taking her back to the stage to be with the band. 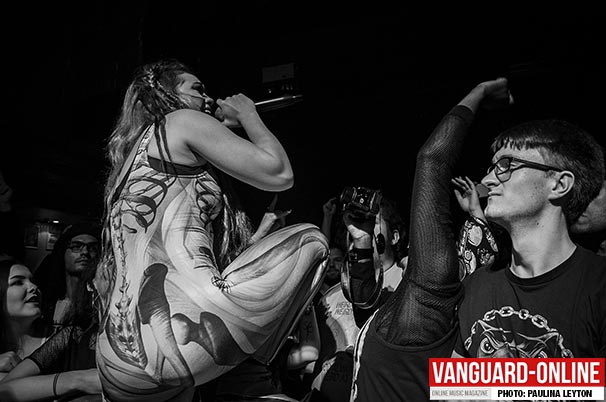 Sever kindly offered us some time between their gigs to answer few questions, check it out:

–What’s your music influences, because as far as I can tell and notice from your previous and first album and after listening to your first track, Anti-Anthem from the upcoming new album Opus Mar, you’re a kind of mix of different bands and styles, tell us a bit about it.

Sever: Yes, we love to integrate many styles into our sound, punk, dancehall, metal, pop, rock, to name a few. Our influences span over many years of us each soaking up as much music as possible. I will say one of the main bands that helped influence us to start this band was Skindred. Crazy to think now we’ve collaborated with lead singer Benji Webbe on a song for our new album. We also love bands such as Rage Against the Machine, System of a Down & No Doubt.

–How would you define your sound?

S.: We usually call it punk metal dancehall. Sometimes we’ll tell people to imagine No Doubt was a metal band. We like to be heavy without compromising strong songwriting and great melody.

–About the imagery, you remind us a lot Rob Zombie, all the blood stuff and comic style when making videos and especially Sweetnam your personal image, what would you tell us about this?

S.: Yes, we produce and direct all our own videos and imagery is a very important element to our band. We love B-movies (or C-movies) that we find at the bottom of a bargain bin at a truck stop. It’s the weird, not so polished look and feel that we love to capture. In the digital age, having video is so important to properly promote our songs so we make music videos for almost every song we release. The fans seems to dig our world we’ve created called “Cyco City” where each video takes place.

S.: We are hoping for a release in March 2017. It’s got an exciting feature by Benji Webbe on a track called “Move Mountains” – As far as stylistically, I feel it’s picking up where our previous album “Lost in Cyco City” took off. We’re pushing ourselves with this one to have some strong elements that come off powerful live. I think since we’ve been on and off the road while we’ve been working on the album, how songs come off live is very important to us. Vocally, I’ve been expanding myself in every direction. I love playing with rhythm and tone to go to new places. We’re really excited to share it.

–Any funny or remarkable anecdote from the recording process?

S.: The recording process for Opus Mar has been going on over the last couple years. Since we have our own studio, we work bit by bit in between our other jobs and tours. The first time we recorded outside our home studio, is when we came to the UK to tour and afterwards spent time working on the song “Move Mountains” with producer James “LeRock” Loughrey in the London countryside. I was warming up my vocals outside in the garden and a fawn was grazing in the meadow, it was so picturesque. During our tour before we started recording, we were going back and forth with Benji Webbe. He’d email us some vocal ideas and we’d be freaking out in various coffee shops disturbing the peace when we’d get a new track from him. We’re very big fans so it was a huge deal for us.

–How different was the recording process of Opus Mar from your previous one Lost In Cyco City?

S.: Matt “MD13” Drake our guitarist, does most of the music production and I do most of the lyrics and melody, but we rework the songs constantly by giving each other critiques. This time we’re remotely collaborating with producer James “Le Rock” Loughrey on the rest of the album. It’s really cool working on songs until we’re happy and then handing them over to James and then they come back even better than we could’ve imagined!

–About touring, How’s the experience touring this year with Alien Ant Farm?

S.: It’s been great to be out on the road in UK for our fifth time. We’re honoured to be part of a bill with Alien Ant Farm. All their fans have been really kind to us, and it’s rewarding to see that we’ve got our own group of “cycos” showing us support at the shows too.

–You’ve been touring in the UK and Ireland couple of years ago and did already few cities on this year tour, Do you feel any difference in the reception of the audience back with the release of Lost In Cyco City and now?

S.: We see the audience singing along now. We’ve had the album out for three years and we’ve been over to the UK 5 times in that timespan, so it’s amazing to watch the build. When we return to a city a second or third time, it’s so cool to see the familiar faces.

–Are you planning to go on tour to the rest of Europe?

S.: We are trying to work out a European Tour once Opus Mar drops.

–How’s the Rock/Metal scene in Canada?, we don’t hear too many bands from those lands here in Europe apart from a few like Rush or Annihilator or Avril Lavigne….This last one you can ignore it…haha

S.: In Canada there are many amazing bands and so much talent. We are big fans of Billy Talent and Alexis on Fire, we’ve been seeing their T-shirts while on tour here. We have quite a cool network of bands in Toronto/ Hamilton area, but currently the mainstream press and radio are more into folk rock and not as much into metal in Canada. There are not many outlets for our style of music, so we find it great to explore other territories to get ourselves out there.

–We’re very happy to see more girls in the rock scene, we all know this industry is full of “dicks”, so this question goes straight to Sweetnam, After your radical change from doing pop to go into Sumo Cyco where you gave a 180 grade turning in your personal image and of course in music genre,  How do you feel surrounded by guys and how different is your experience to being in a rock band from a pop singer?

S.: Well it really isn’t too different. I’ve always felt I needed to prove myself and that’s probably what has driven me to be the artist I am today. Even with my pop music I was always surrounded by male producers, and A&R reps, so it’s always a battle for more girl power in the industry. I can surprise people with my stage presence on bills with other male fronted bands. I guess people don’t expect a woman to be powerful so I like to prove those people wrong.

–And for you guys, why having a girl as a frontman? How’d everything started?

S.: I met MD and Thor when I was performing music as a solo artist. I auditioned them to be my support band. Our history goes back 15 years. The boys introduced me to many of the bands I know and love. I looked up to Matt and Ken as musicians that had paid their dues in the scene. At first they were just working for me, but things turned into a friendship and I won them over.

–For all the people who haven’t heard you yet, what would youtell them to get hooked and willing to pay to go to your shows?

S.: I would just have to say that once you see us live on stage you will not be disappointed. We pride ourselves in being entertainers, not just musicians that play out what’s on our album. If you don’t have the chance to see us live, I would suggest to watch our music videos. Once you get caught up in Cyco City there’s no going back! 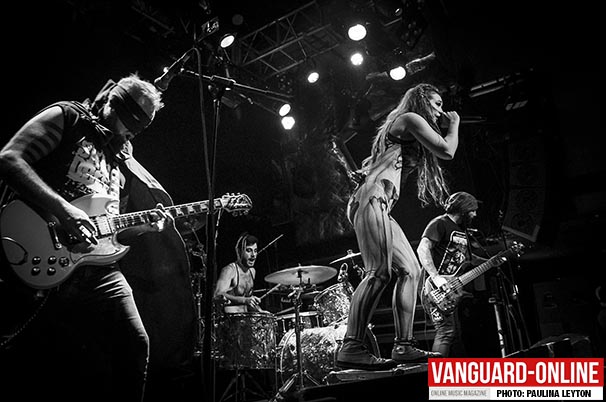 Interview and photography by Paulina Leyton.

1 thought on “INTERVIEW WITH SKYE “SEVER” SWEETNAM, THE ENERGETIC AND UNSTOPPABLE FRONTWOMAN OF SUMO CYCO”