Ten years after the release of their chart-topping debut ‘To Lose My Life…’ London trio White Lies have returned with their boldest offering yet; the aptly titled ‘Five’. The self-funded record boasts their longest single to date, their first time using acoustic guitar, a cameo of Jazz piano, a nod to their love of Metal, and many more unexpected moments that nevertheless maintain the signature White Lies sound their cult following have come to know and love. ‘Five’ is White Lies at their most confident, with all the maturity of a band weathering a decade in a notoriously fickle music industry. I speak to drummer Jack Lawrence-Brown about this milestone record, the importance of trustworthy collaborators, and taking ‘Five’ on the road. 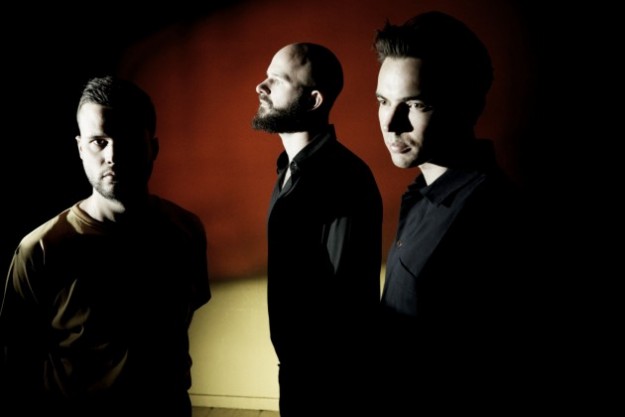 White Lies had a choice to make before embarking on ‘Five’; pitch ideas to labels and secure the funding and support needed to bring the record to fruition, or, fund the record themselves and go it solo. As it turns out, the risk of the latter proved worthwhile, affording them exactly the creative space needed to make their most experimental work to date.

“I think the fact that we were making (and funding) this album without the backing of a label gave us the confidence we needed to take a few new risks” Jack explains. He offers single Time to Give as an example, an album opener that received airplay in its sprawling 7.5 minute entirety. “Time to Give was an interesting case, because the original demo of that song was only about two minutes long. We spent a couple of weeks in California with our long time collaborator Ed Buller working on the tracks before the recording sessions began, and he immediately said that Time to Give was boring. He said we needed to really push it in a number of different ways to make it worthy of being on the album. He was sort of like a human “oblique strategy” card. So through working with people we trust giving us honest opinions, and no concern of what a label might think, we just pushed every song to a limit we felt suited it.”

Despite this, White Lies have never shied away from a catchy hook or anthemic singalong chorus, and ‘Five’ provides these moments in abundance. Single Tokyo is perhaps their biggest pop excursion to date. “Our default feeling is that we are a band with pop sensibilities, so we like to leave enough of that in our tracks” Jack concludes.

With ‘Five’  White Lies also continue their tradition of offering up gripping and cinematic music videos, more akin to short films than mere album promo, “I think that the cinematic style has always suited the sort of music we make” agrees Jack. Believe It and Tokyo are engaging in their absurdity, but still deeply human. They also mark the return of visual collaborator David Pablos, proving once again the value in selectively cultivating relationships with like-minded creatives across a spectrum of skill sets.

“We prefer to take a back seat for the video process and entrust the music to a director we love and respect. That has been Mexican director, David Pablos, for this album (as well as a couple of vids from Friends too). David is an acclaimed feature film director in Mexico, so the music video format is a fairly new one for him to grapple with but I think he has done a great job. Especially for the Tokyo video, that really ticks my boxes. For us, we would like to let the directors take the lead and tell their own interpretation of the tracks, and try and weave us and the music through that – so the music is more of soundtrack to their creative vision”

In the era of streaming, White Lies recognize that the way we consume music has changed. However increased accessibility means the music video remains an integral part of that experience, and increased consumption of visual media ensures their efforts don’t go unnoticed.

“Videos in the sort of post-MTV era are still important, obviously with the popularity of YouTube, but also creating little nuggets of interesting visual content in other areas of an album campaign is really important these days, and we strive to maintain a strong aesthetic that matches with the artwork for the records.”

Having only played a scattering of festival slots last year, White Lies are currently back on the live circuit and embarking on a UK/EU/US/MX tour. Jack notes there is an inevitable adjustment period whereby the first couple of shows are overwhelming in lot of ways, but that they’ve been greeted by “great audiences, and some really spectacular venues.” Additionally, he explains “I think we are finding our feet with the set list now. It’s the longest we have ever played so a bit of a shock to the system to start with physically, but I think it’s a really great set and people seem to be going home very happy every night!”

When asked what he hopes people take away from a White Lies show, Jack references their loyal and passionate fanbase who have so fully embraced the band and its fandom; “a feeling of a great communal experience I hope, although that does sound sliiiightly hippy. But basically I think a lot of people who support White Lies and have supported us over the last decade feel a real sense of ownership and that they’re in a sort of club. And I love that.”

This love is no doubt sincere, as White Lies have always toured extensively, both in the UK and internationally. However their current tour has over 40 dates – their longest thus far – so I wonder how the band keep themselves from burning out.

“Good question!” Jack jokes, “but mainly by enjoying ourselves. Getting out and about in different cities. I do a lot of running to try and not let the booze intake knock me too far out of shape. Eat well – as in like, have lots of posh lunches. Just look after yourself and remember it’s an amazing job we are all very lucky to be doing!”

This humble sense of appreciation is rooted in the ethos of White Lies. While some bands grow weary or even resentful of their breakthrough songs (think Radiohead hating Creep or Oasis hating Wonderwall) White Lies remain grateful for ‘To Lose My Life…’ and the fans it has earned them. It also serves as a testament to their strength and stability as a group, still writing, recording, and touring ten years later, more confident than ever before.

“I think ‘Five’ is a really interesting marker for us – we are still enjoying the fruits of our labours at 19 years old to be honest – ‘To Lose My Life…’ is still a very important record for a lot of people around the world. I think today, as a band, we are totally settled as people, and that has lead us to feel a lot more confident in what we do. Specifically this album and the last one, which we really produced and directed the whole process ourselves. I think these days we feel we belong where we are – still a successful band touring the world and expanding our creativity as we go. That, for me is the biggest change. Maybe it’s the first time in our careers we really felt like we deserve our longevity.”

With ‘Five’ finally out in the world, 2019 is a year for White Lies to enjoy the fruits of their labor.

“The UK/EU tour is up and running, getting better every night. I love that progression on a daily basis. We’re super excited about doing some festivals this summer, and also about our trip to Mexico in May. We have a really big fanbase over there and we play bigger venues than most of the UK out there! So I can’t wait for that. And – of course – our long overdue return to Ireland.”

It sounds like decade two is off to a solid start.

White Lies return to Ireland in March, full tour details can be found on www.whitelies.com.