This interview was conducted in 2018. Before you read on you may also want to read a more up to date interview we conducted with Pale Waves, just a few weeks ago (Feb, 2021).

Pale Waves are one of the most talked about newcomers in the Brit indie-pop scene. Having earned a cult following in their hometown of Manchester they signed to Dirty Hit last year, one of the few independent labels that boast a legion of fans in their own right. Now, one NME award, nearly a dozen singles, and hundreds of gigs later, they’re touring in support of debut album My Mind Makes Noises. I sit down with lead vocalist and guitarist Heather Baron-Gracie backstage ahead of their gig in Cork’s Cyprus Avenue to talk touring, songwriting, community, and more. 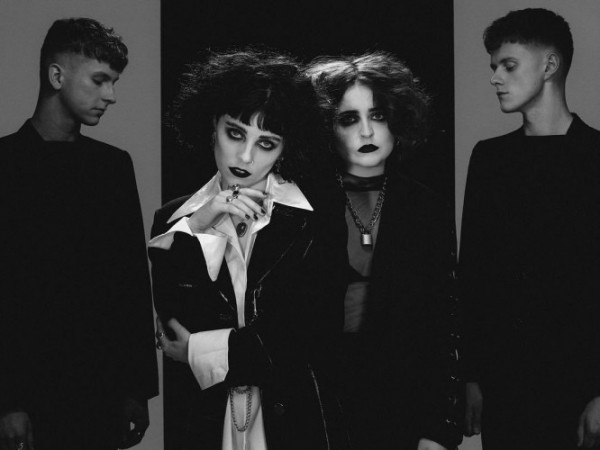 Tonight’s venue is smaller than what Pale Waves are now used to, so much so that finding a quiet place to chat is a task in itself. We settle on a storage room lined floor to ceiling with kegs, pulling up a couple stools as Heather greets me warmly. Pale Waves are nearing the end of an extensive UK and Ireland tour, and were in Belfast just last night (i.e. about as far away from Cork as you can get on this island), but the crowd made it worthwhile.

“Belfast was wicked! They’re a very enthusiastic, youthful crowd. They were very very rowdy” Heather smiles. This tour featured Pale Waves’ biggest headlines shows to date, a fact they don’t take for granted. “The tour so far has been incredible, especially the UK dates; they were big venues so it was mental to think that we could sell it out”.

By now hectic schedules are second nature to Pale Waves. This year alone they released an EP, six music videos, a debut album, and played in Canada and the US, where they’ll return later this month. So how do they keep themselves from burning out?

“I don’t know” laughs Heather. “Sometimes it does get very overwhelming, and we have had points where – especially me – where I’ve been like ‘oh I just need to go home and cuddle my dogs’”. She cites their hard-working crew and close relationship with the band as a major help, and reflects on how fame has affected their dynamic within the group “I think when you get bigger, a lot of the pressure sort of comes off actually, because you don’t need to do like, setting up everything, or dragging everything up the stairs”. Which affords them more time to concentrate on what really matters, I assume. “Exactly yeah! The writing and performing”.

Debut album My Mind Makes Noises was released just last month, distilling what fans have come to know and love from Pale Waves; emotionally honest pop music with catchy hooks and anthemic guitar riffs, plus a sprinkling of 80s nostalgia. It’s also a deeply personal album, the lyrics reading almost like diary entries, and I can’t help but wonder if Heather ever felt nervous putting so much of herself into the record.

“Yeah, and sometimes when I do think about it, or when I really analyse the songs again it does … catch me a bit off guard. But I feel those are the songs people really relate to the most, like Noises and Karl. Like so many fans say to me all the time they’ve helped them get through such a bad time, so, it’s worth it”.

Noises confronts Heathers struggles with insecurity and self-doubt, while Karl details her experience of grief. They showcase a strength of Pale Waves in their ability to craft accessible pop records that confront difficult emotions, and while they are clearly resonating with listeners, learning to write with such honestly has been a process. “At the start of Pale Waves, I just hid behind the metaphors. And it wasn’t a good thing to do, but it took me a while to get used to putting so much on show for everyone.”

To compliment the narrative style of Pale Waves’ song writing, their music videos have a definite cinematic feel to them. While some focus on color, mood, or aesthetic, others – for example Eighteen – are essentially short films featuring the band as their protagonists. Heather tells me she writes all the music videos herself and is very hands on with the process, as showcasing your talent through as many mediums as possible provides people with more opportunity to emotionally invest in the work. “People want to buy into you”, she concludes.

Given these cinematic videos and her narrative lyricism, I wonder if Pale Waves would ever consider writing for a soundtrack. “Yeah maybe! I went through this phase where I wrote music to trailers” Heather explains, “I don’t know why, I would just find a trailer or a clip from a movie, and then just sit on my laptop and write music to it”. Sounds like pretty good writing homework to me.

If they could re-score any film then, what would it be? People might expect something that compliments their love of 80s synth (perhaps John Hughes) or their goth aesthetic (Tim Burton?), but Heather concludes it would have to be something dramatic. “Maybe Godzilla”.  2020’s Godzilla vs. Kong hasn’t announced a soundtrack yet, so … now’s your chance Warner Bros.

Pale Waves’ fanbase has grown rapidly over the past two years. Now that My Mind Makes Noises is due to attract even more fans, I question if they feel any pressure knowing so many people are watching for what they do next.

Yes, is the short answer, but it’s something Pale Waves have already come to terms with. “Yeah but at the same time I feel like we’ve always had that with our band. As soon as we put out There’s a Honey people were demanding the album and I was like, it’s one song! We’ve put one song out give us a break!” Heather laughs. Her faith in their work is enough to tide her over, but, she’s only human. “Everything that we put out I really believe in so, yeah, I’m confident, but sometimes it does get a bit too much”.

The live show is a quintessential part of the Pale Waves experience, and Heather wants it to be a safe, positive space for fans to come together in their shared love of music. “I want people to come to our shows and feel at ease, like it’s a community. Like, we dress however we wanna dress and a lot of people would look at us and think ‘why are you dressing like that, that’s not acceptable’ so I just want them to feel like they’re in a room with people that share the same beliefs, and feel comfortable with that”.

Pale Waves – Heather and drummer Ciara specifically – embrace stylish and striking dark fashion. A quick google search would produce a multitude of Pale Waves inspired fashion and make up tutorials. Blending vintage and contemporary and curating a cohesive aesthetic for the Pale Waves brand, they encourage fans to embrace their own personal style, and that merits praise. However at times media unfairly fixate on this styling, even at the expense of their music. The band have a bizarre amount of criticism levied at them for being so-called “goth-bait”, where liking both goth styling and pop music somehow doesn’t compute. At times there is undeniably a subtle misogyny at play, and so Heather’s unapologetic assurance and message of encouragement to fans feels all the more empowering.

This sincerity has no doubt contributed to the passionate community of fans that has formed around Pale Waves. It’s something Heather had always hoped their band might get to experience, “I would hope that we would have a fan base that are really sort of attentive to everything and are very passionate, because we’re passionate musicians”. It’s a reciprocal relationship, and there’s something very pure in that.

2018 isn’t over yet, but Pale Waves have already had an amazing year. What are they most looking forward to in 2019? Heather reveals that they are going to LA for two or three weeks in February to record an EP, which she’s already excited about. They’ll also be back in Arenas (including Dublin’s 3arena) to support label mates and friends The 1975.

I close our interview by asking Heather what she wants Pale Waves to be remembered for, and without skipping a beat she replies “giving the world great music, and creating a community where everyone can look how they wanna look and feel at ease”. 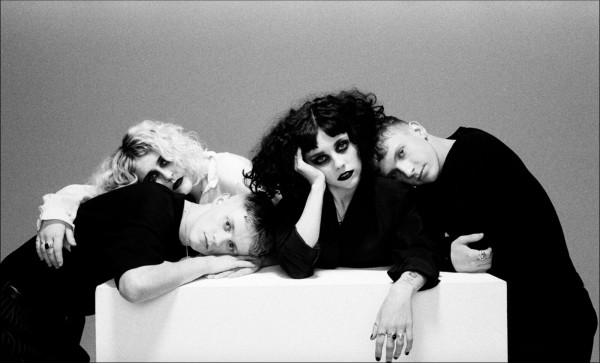