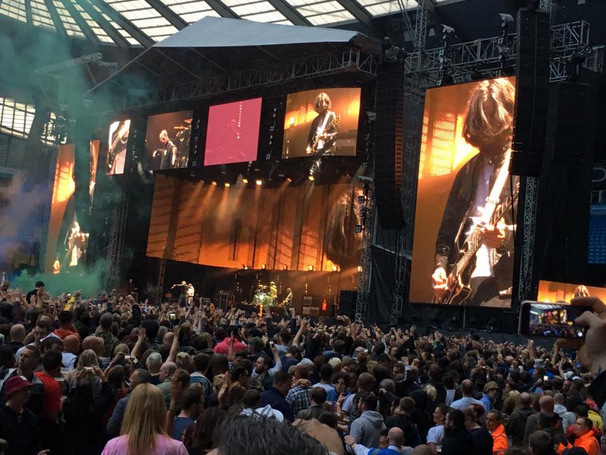 The Stone Roses reunited five years ago. Just recently they dropped two singles in the space of weeks – All For One and Beautiful Thing – and sprung two warm-up shows in Halifax and Carlisle. Now it was time to take on the Etihad with 60k people. A host of stars came to the opening gig, David Beckham included, but no one cared for them. The word on everyone’s lips were the Stone Roses. Manchester had come to a standstill. Outside the stadium, with one vision, street vendors made a fortune selling bucket hats and Madchester paraphernalia.

The buzz in the place was outstanding.

At the Etihad, the Stone Roses showed just how on top of their game they still are. Not that this would be a surprise to many, but its worth bearing in mind the separate journeys that band members have made since they disbanded in the mid 90s. Ian Brown has had a very successful solo run. Mani has played with Primal Scream, The Jesus and Mary Chain, The Beastie Boys and Ocean Colour Scene. John Squire concentrated on art.

The opening track I Wanna be Adored, the opening track for all their gigs, quickly turned into a Karaoke session. Words could not describe the feeling of belonging between the 60k fans at this moment, even though audience members varied from fresh teen fans to people in their 60s.

The fans admiration of the band was clear to see. Of course it’s obvious why; in two albums – their eponymous debut and follow up The Second Coming – they barely put a foot wrong. The songs stand the test, they still sound vital.

Back then, the Roses were a band of equals – it wasn’t about Ian Brown or John Squire, or Reni or Mani. 26 years later nothing’s changed.

As the skies darkened the crowd was illuminated by a fantastic lightshow and the fans’ homemade pyrotechnics. The band ran through a list of classics, with the 60k crowd all the time acting as backing vocalists. The most memorable song was This is the One, which Ian Brown dedicated to Mr. Beckham .

1 thought on “I’m no Clown, I Wont Back Down, Don’t Need You to Tell Me What’s Going Down”