Alynda Segurra works hard. She’s been working hard for a long time and it looks like it is finally paying off, with rave album reviews and a full Brudenell Social Club tonight. When I first saw Hurray For The Riff Raff – the name she goes by – in 2011, supporting Abigail Washburn, she had a solid set of Americana-influenced songs. Five years later, in 2016, she had a full band, a set of excellent songs and the beginnings of 2017’s album, treating us to a preview of five of the songs. Back then, last year, she was catching fire and at moments channelled a shamanistic spirit. 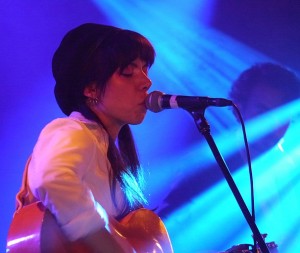 Tonight, in 2017, her set is an all-to-brief hour, made up mostly of tracks from the new album, with a small clutch from previous years. She sets the bar high by playing Nina Simone’s ‘I Wish I Knew How It Would Feel To Be Free’ (she won’t have known that to us old folks, the tune is the theme to a TV film review programme…). The song makes sense, Alynda is being positioned as a protest singer now and tells us so. I don’t hear the difference – her songs of the streets have always voiced the oppressed and down-trodden. But I guess we need our protest singers, so all power to her elbow. Confident and fronting an excellent band, half the set is delivered as normal, from behind a guitar. In a new move, she puts it down and stalks the stage, twisting and prowling. Somehow it is less passionate than when I’ve seen her hidden behind the guitar but there’s no doubt it is polished. The sound is polished too and, at times (in Lonely Girl), has an eighties pop sheen. The bass is sweet and clear, keys unobtrusive and the guitar a beautiful voice, regularly spilling out illustrative solos from the deep resonator body and some lovely surf guitar riffs. 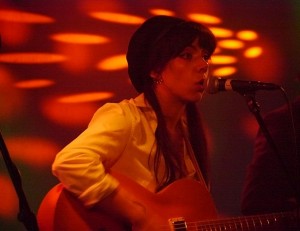 She apologises. Last July she promised America wouldn’t elect Trump, but they did. She’ll continue to sow dissent through lyrics and interviews. Her songs draw on her background, her runaway time in her youth, her family’s harsh life as immigrants. More than that, she offers inspiration and uplift through songs like Navigator, like Nothing’s Gonna Change This Girl and mostly through the wonderful Pa’lante – a song of fighting through. It brings her strongest performance and is close to her heart. She can still do it old style and proves it with her on keys, with the guitarist, playing 14th Floor, dedicated to her Dad, working hard for his family. Then again on solo acoustic with a sad ballad about predators; men using up love-lorn, lonely young women. It’s a lovely, if downbeat song and Segarra clearly loves it. 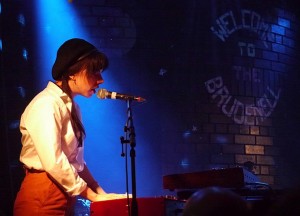 This is a polished performance of a set of excellent songs, from an impassioned singer and tight band. What’s not to like?