I’m starting to get used to the idea of a solo artist having a name that sounds like a band. I’m not getting to like it, but I’m getting accustomed. I’ll make a lot of allowances for Alynda Segarra, who goes by the stage name of Hurray For The Riff Raff. Possessing a winning stage presence and a stack of slightly off-kilter songs with killer choruses, she / they have a lot going for them. Even the first time I saw her perform as a duo, supporting Abigail Washington in 2011 (see Steve Claire’s review here), there was a presence. A couple of albums later, the band haven’t set the world on fire but they’re filling discerning venues like The Brudenell and winning plaudits. 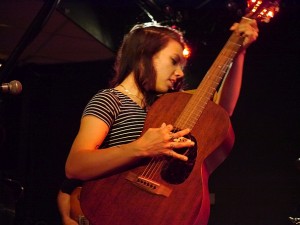 Backed tonight by a 4 piece band, the sound is full and, as always at The Brudenell, clear. Keys add colour, while the electric lead guitar allows Alynda to focus on her acoustic and vocal concentration. Alynda Lee Segarra has a remarkable face, one that shows all the emotion she pours into each song, each an individual slice of feeling. The elements are varied, almost too varied – there are times with the older material, when I can hear her trying out different writing voices before she settles on her own. 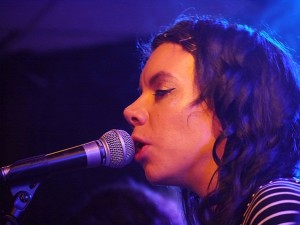 She’s chatty and spends plenty of time explaining songs or reminding us how great we are – always a nice touch. She dedicates Nothings Gonna Change This Girl to rebellious women. It’s a song of desire and it swings, with Alynda repeating the chorus in a dream-like state. She dedicates Body Electric to Alton Sterling, shot by police the day before, whilst being restrained. Lake Of Fire sees her turn on the Patti Smith effect with some rock and roll incantatory reverie. The bassist loves it; a solid and tuneful bassist throughout the show, she comes to life in the faster numbers. She gets to lead in with the bass to Rican Beach, where Alynda puts her guitar down and the electric guitar plays nice figures. Crash On The Huy is a cutely grumpy yet bouncy road song. Woody Guthrie gets a tribute with Blue Ridge Mountains and the bass revs up again. “This is an outlaw song” says Alynda; Good Time Blues. St Roch Blues, stripped of context would be a great old gospel song – it laments and inspires revolt at the same time. 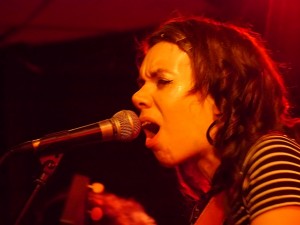 The audience is respectful, receptive and relaxed. They earn more encores than the band had planned. A solo acoustic number, highlighting who is the star, precedes Lucinda Williams’ Keep On Walking. The show ends with the lovely old favourite, Little Black Star. “I learned this off a John Jacob Niles recording”, she says. An American folklorist, she has tweaked and changed the song to make it her own. She’s a force of nature, having built her own mythology – Puerto-Rican, grew up in Brooklyn, became a street kid, ended up in New Orleans, hangs around and does almost anti-folk stuff for da kids…. It’s hard not to love her and she clearly pours her heart into what she does – her face shows that each song is her baby. If she can stick with her own writing voice, Rif Raff is a character heading down the Patti Smith shamen road. 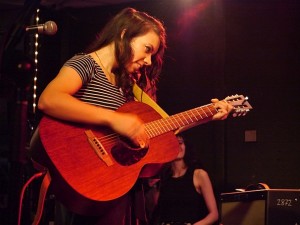 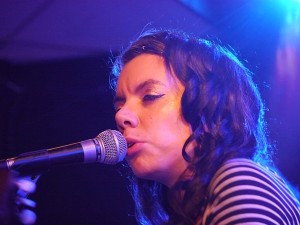