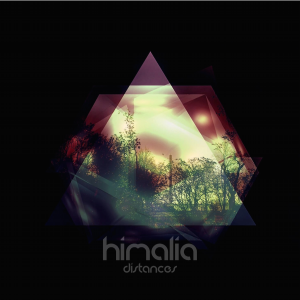 Genre tags are stupid, aren’t they? Of the ten tracks on Himalia’s new album ‘Distances’, four are labelled ‘electronic’, two ‘ambient’, likewise ‘garage’ and one each of ‘chillstep’ and ‘soundscape’. No doubt this is helpful to some, but to me, it smacks of indecision, or worse, confusion. If this is helpful to you, good luck to you; to me, I’d have stuck with ‘electronic’ and be done with it.

The bottom line for any album, regardless of genre, is does it work? By this I mean two things: first, does it involve me – am I engaged by it; second, am I invited back for further listens? Well, let’s cut to the chase – yes, this album works, mostly. When it succeeds most emphatically, it creates carefully constructed mood pieces with a nice eye for detail. At other points, it feels rote and emotionless.

The album operates in the downtempo electronic sphere. More obvious touchpoints include Burial, James Blake crossed with that whole chillout thing of the 90s; less obvious touchpoints for me, Harold Budd, late 80s David Sylvian, or perhaps even indie texturists Difjuz or Disco Inferno. This is a difficult territory to succeed in. It’s relatively easy to get a laptop, pro tools and a shit-ton of reverb, and to make something that sounds like this. It’s much much harder to make it good. The abundance of space and the lack of tempo make it real easy to get boring in that lift-muzak way.

The album is actually strongest when letting the beats take a second place. The opener ‘So Long Ago…’ is listless in the best possible way. It drifts in and out with a bass undercurrent that never intrudes or feels forced – the keyboards allow for a sleepy uncomplicated melody awash in reverb. ‘Viewpoint’, a short interlude before the single ‘Kingdom’ appears, wouldn’t sound terribly out of place on a Cocteau Twins album. ‘Drowning’, apparently a tribute to TV’s Breaking Bad (although I don’t see it myself), features a stately metronomic piano backed by ghostly backing singer who reminds me improbably of Ian Curtis. Closing the album (aside from a remix of ‘Kingdom’) is the title track, which is the weakest of these. It is pleasant, but for a title that points towards geometric forms, it lacks direction.

The remaining tracks all offer a more distinct nod to clubland. ‘If’ (featuring Laurelle) is pleasant enough but struggles to stand up to repeated listens. It runs the risk of sounding like the waiting room in some futuristic tech firm. You’d have to take things really personally to take offense at it, but it’s hard to see what it’s bringing to (any) party. However, the standout of these tracks, ‘Kingdom’, ran in the opposite direction. Initially, it struck me as cool (as in cold), but repeated listens bring out the richness of Sakima’s vocals. Sakima, Zane Lowe’s ‘next hype’ of late last year, offers a moody lyric that manages to latches onto the groove and gradually took hold and won me over.

I’d like to say the same of ‘Love Like a Drug’ featuring another guest vocalist, Chicagoan Alex Jordahl. A more hip hop driven vocal, it fails to stretch beyond the string of clichéd similies equating love and drugs, which sounds tireder than Jordahl’s vocal. The beats are adequate, but nothing inspires. I can’t think of any reason to come back for more.

This brings me back to my initial point. I appreciate that artists want to show range, ensure a dynamic across an album, make connections with a wider audience. However, an album must also draw the listener back for more. The indecision of genre tags is reflected in the music and it disrupts – not radically, but enough to blunt the force of the record. On the up side, however, at 38 minutes it knows better than to outstay its welcome. So, I can see this album getting further spins – especially late at night when its relaxed and smooth textures will work best. And on that basis, I’ve got to say that the album works, mostly.