This is the Into The Woods tour, promoting (and featuring songs from) the new concept album. It follows on from last year’s The Machine Stops, based on E M Forster’s sci-fi novel, showcased tonight as well. I’ll not mock the conceptual grandiosity, since Hawkwind’s greatest album, the live Space Ritual, is chock full of Michael Moorcock pretention and grand pronouncements on space travel. No – with Hawkwind the thing to do is open the ears, relax the mind and go with the cosmic boogie. 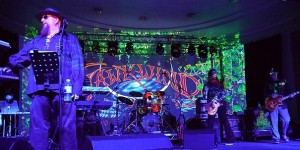 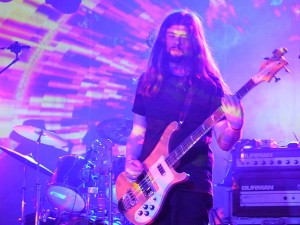 A crowd composed of aging hippies, middle-aged folks, younger ones, the sensibly dressed, the fans, the curious, the T-shirted and those specially attired in chest-plate, wristbands or lab coat spells out the range of appeal. Whilst only once troubling the charts, many have a soft spot for the band who symbolised the counter-culture for so long. Possessors of a certain sort of Englishness, they are avatars for going their own way, dogged persistence and free-thinking. They were space-rock for hippies but never too proggy and with a grinding simplicity that made them always accessible to rockers, their anti-establishment ways kept their flag high in the punk era, the New Age travellers loved them and ravers liked their mind-altering music. And so on. Continuing to play a simple rock boogie, a churning electric guitar riff, the repetition brings an organic high. So it is tonight. There are no short songs and the riffing lifts thoughts to a higher plane over the hundred minutes of the set. The band does, of course play songs and has lyrics but by and large, we are waiting to get back to Dave Brock’s guitar. 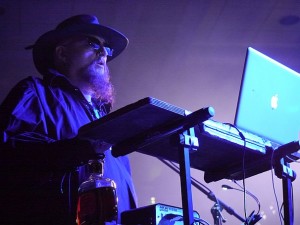 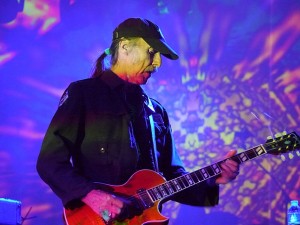 The core sound, as always, is simple rock-blues grind allied to tuneful burbling bass. Keyboards add colour as oscillators create that space sound the band are known for. Despite being as much a concept as a band and having had fifty members through the doors, Dave Brock is the heart of the band and the sound is always unarguably Hawkwind. Laptops bring a fancier set of sound effects and the light show is distinctly high-tech but the essence is the same – sound and light at length till you trance out. 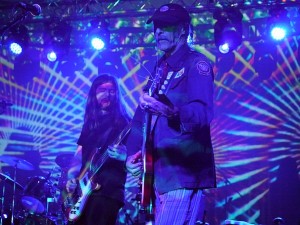 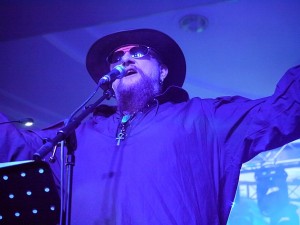 The repertoire is so huge that, although obvious things are played (Silver Machine, Spirit Of The Age, Shot Down In The Night, etc), the band can afford to leave out oldies like Master Of The Universe, Orgone Accumulator, Sonic Attack and so on, without complaint. All the crowd want is that English version of krautrock, the churning riffs and twirling electronics and that’s what they get. The only surprise tonight is that a band with forty-five years of history continues to deliver the goods without defacing their past or becoming a tribute band, turning out the favourites for the fans.

You can read our article about the band here.

Hawkwind were supported tonight by Glass Mountain, a local band from Bradford. Their set wandered from post-rock to ballads to prog rock via a twisty and intent lead singer and a polished band. Many pedals and effects were used, much effort was expended. The band has a lot of potential if they can sharpen their focus to a range narrow enough to keep within the limited expectations of a live audience and not need listeners to retune their ears to each new piece.