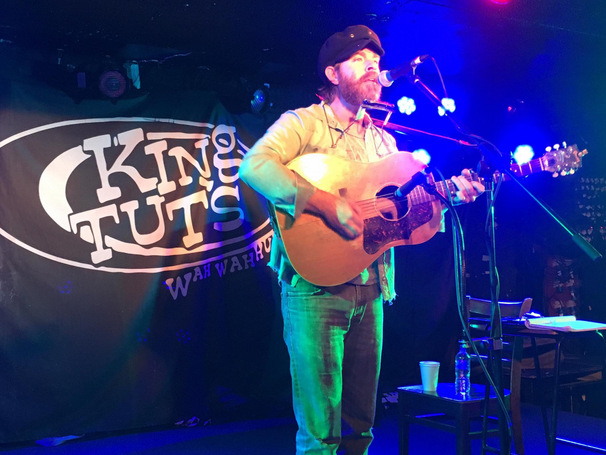 Joe Purdy is an American folk hero, who rocked the roof off King Tuts in Glasgow last night.

Playing to a crowd of 160 he came on stage dressed in denims, boots, a cap and
a beat up guitar called Mabel.

I had never seen Joe Purdy before so I was a bit apprehensive.

Joe was touring with Amy Vachal.

The first thing Joe did was apologise for Donald Trump, and he made a few jokes to break the ice. It was the beginning of one of the funniest acts I have seen in a long while.

His music was pretty amazing too.

Joe has had an amazing career releasing 12 albums in 8 years. Many of his songs have been used in films and TV series including Lost, Grey’s Anatomy and The Secret Life of Bees.

He has a gift for being able to sing stories, his songs are descriptive and reminded me of a young Bob Dylan (when Dylan was good).

Purdy captivated the crowd explaining the origin of his songs, the most memorable for me being ‘My Country’ from his latest album ‘Who Will Be Next?’

He told his fans he had already finished most of the album before the end of 2015. However during Christmas Eve he had a conversation with his mother, a retired school teacher, who told him not to be so critical, which he said, changed his outlook and the album.

Joe got all the crowd involved in the gig. The atmosphere was warm and intimate. He made you feel as if you were the only one in the room. Before you knew it 160 people were having a sing along with Joe.

He then ran through a combination of new songs and classics including ‘Some Things Don’t Work Out’, ‘Brand New Set of Wings’ and ‘Who Will Be Next’.

We all had the time of our our lives singing and laughing all night until Joe was told we had reached the curfew.

Now I’ve heard Joe Purdy live I wished I was there to see him the last time he played Glasgow 8 years ago.

I’ll definitely be there when he comes back.

Amazing night all round.