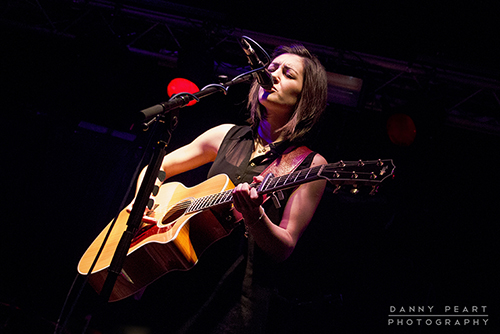 Tonight Leeds Cockpit is holding a packed room for local talent Hannah Trigwell, who is getting ready to finish off her debut headline tour. Having only a handful of songs from past E.P’s and a back catalogue of covers, tonight was more of an insight to see what the Leeds based singer/songwriter has up her sleeves for her first full length album.

But before Hannah hits the stage, it’s left to a collective of solo artists to bring something to the party. Opener Jack Haining has only a small gathering of early comers to perform to, but does enough to keep people interested with his solid acoustic performance. As the room slowly starts to fill Elissa Franceschi takes the stage, armed with a set full of relaxed songs to set the mood with such as ‘Touch’, and ‘Salt’ minus the inclusion of brother Josh Franceschi (You Me At Six.)

Elissa has no problem gathering the attention of the room with her powerful voice, however this cannot be said for the following act Ethem Basden, who struggled to find a way to penetrate past the noise of a full rowdy and chatty crowd. It really is a shame as Ethem has a fantastic voice and style with some clever guitar play. ‘Save Him’ and ‘In the Ghetto’ are highlights from a strong set from the sixteen year old, but the stand out song of the set was a well-performed cover of Daughter’s ‘Youth.’

The crowd finally settles as Hannah Trigwell takes to the stage, looking rather fragile and shy she flies through the start of the set with ‘Give It Up’ from her debut E.P ‘Hold My Heart’ which delivers an impressive vocal performance from the 23 year old. A moving performance of the beautiful ‘Headrush’ from the E.P ‘Pieces’ soon follows to silence the room.

A fantastic cover of Drake’s ‘Hold On, We’re Going Home’ gets the crowd singing along for the first time of the night, before giving everyone a taste of some new music. Hannah takes the opportunity to play some new songs to give the 100 strong crowd a tease of her new sound, which seems to be slightly faster and catchier, and if ‘Numbers’ and ‘Rectify’ are anything to go by, Hannah’s debut album will be something special. ‘Hurricane’ is another example of her newly developed sound, and provides an opportunity for the crowd to get involved as Hannah gets them singing along throughout the song.

The Encore includes an acoustic cover of ‘Hallelujah’ before ending with the slightly more upbeat ‘Tightrope’ to finish the set off perfectly. It may be the occasion of playing to a packed room in her hometown full of familiar faces, which explains the nervousness of her stage presence as she shakes through the majority of the set, but none the less pulls off an incredible performance throughout.

An albums worth of new material is on the cards for this year and off the back of tonight we can’t wait to hear it. It won’t be long until Hannah Trigwell starts turning many heads here in the UK.

Written and photos by Danny Peart

Ambushed by a spring-themed plant-based rock meme, thirty years in the making