This was a strange and charming evening. Sandwiched between two much louder bands, in front of a sparse audience, the tall and glittery Gwenno delivered half an hour of coolly synthesized Welsh-language songs. She’s out to promote her album – a Welsh and Cornish song-cycle based on a 70’s Welsh language science fiction novel. Last time I saw her perform, she was part of The Pipettes, a retro girl band – all sixties and pop.

Tonight, very pregnant, she has to be her own roadie – in stack-heeled boots and a glittery dress. Some time passes while she plugs many, many cables between her keyboard and gadgets before a swift soundcheck. It’s a solo performance with keys, effects, samples and treated vocals. Be warned – many of these songs are very serious but don’t be too worried – unless you speak Welsh, you’d never know unless Gwenno tipped you off. She sounds a lot like a stripped-down Broadcast and the keyboard sounds are of the moment. She mocks these serious songs in a school-teachery way; “this one’s about town planning – Cardiff Bay has changed a lot recently”. “This one’s about Patriarchy. Which is pretty crap. Um. For all of us, actually”. 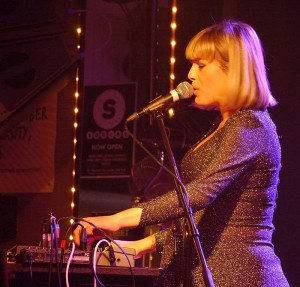 Halfway through she kicks up a gear and I hear lots of recognisable songs. I can’t name them – they’re in Welsh – but that album has had a lot of play here. Her fingers fly, triggering effects, loops and samples. She sings about revolution – any revolution – before ending on a boppy song about the last thing the science-fiction hero thinks before his mind is taken over by robots. Perhaps, she deadpans, it’s the last song we’d hear before the same fate. Cheery……

So – you missed this one. Don’t sweat it – you’ll get plenty from the album.