Wisely mixing her two albums and wisely bringing a full band (she toured solo in 2015), Gwenno returned to The Brudenell, drawing a motley crew of fans. From the curious to the broadsheet review readers to the electronica fans (gently grooving) to the raptly attentive to the ageing raver contingent wildly shaking their bones off to one side, it was an interesting mix. 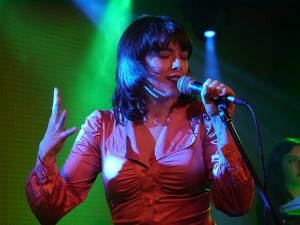 Gwenno Saunders is a gentle and personable guide to the Welsh and Cornish languages, telling us the themes of the songs, the thinking behind the albums and teaching us her Eus Keus (Got Cheese?) song in Cornish, with a wry smile on her face—much like the one from 2015—when she told us a song was about town planning in Swansea. Up in Leeds, she could have been telling us anything, and we understood as much as we would at a Damo Suzuki gig. She goes on to lament the spirit that drove the route to Brexit. 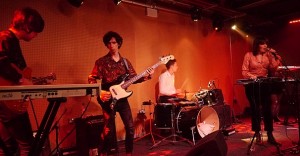 These are strong pieces and though I don’t know the words, I recognised the tunes and beats. Of course there was less detail and atmosphere than the second album, but that’s as expected. It was made up for by the occasion and the presence. She brought a bass with a nice rolling sound and a semi-acoustic guitar providing background and plenty of keys. This was only the second time I’ve seen a Memotron on stage, making a lovely wobbly sound, like the Mellotron it mimics.

The fifty minutes shot past in tasty sounds, strange words and a yarn or two, along with a record-breaking attempt at the most people in a room speaking Cornish. Gwenno tells us she heard an eighteenth century Cornish greeting: “Do you have cheese? Bring cheese. If you don’t have cheese, bring what’s easy”. “There’s my album”, she thought. That spirit of happy exploration was evident and sent us home happy.