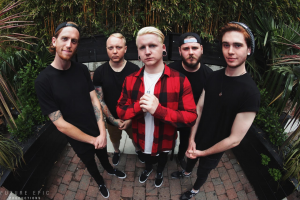 It is a common occurrence to hear many pop punk fans, with an apathetic sigh and a dramatic roll of the eyes, bitterly proclaiming that ‘pop punk is dead’. But with the rise of a new generation of pop punk bands spearheaded by the likes of Neck Deep, State Champs, As It Is and WSTR, among others, the pop punk revival is ploughing on full steam ahead, paving the way for the next wave of young, exciting talent to rise up through the ranks. One such band snapping at the heels of the first wave of the pop punk revival bands are Portsmouth’s High Down, a passionate young quintet whose sound stemmed from a mutual love for all things traditionally pop punk- namely pizza, beer and Blink 182- but who have put their own gritty spin on the traditional clean, upbeat pop punk sound on their debut EP ‘Moving On’, due for release on September 1st as a self-release. It is a jam packed EP with a power and punch that blows any preconceptions out of the water within the opening few notes, and has the potential to be the start of something huge for this ambitious young band.

‘Against the Tide’ opens the EP in style, with a dagger sharp edge to the guitars that literally and metaphorically cut straight through the noise and hit the bone of what matters-championing passionate, eardrum-pounding, wonderfully raucous music! The track’s driving force is the drums, that pound away with fever pitch intensity, highlighting a gut-punching, powerful side of pop punk that amplifies the latter rather than the former! This song in particular will be a welcome reprieve for those growing tired of the sugared melodies and soft ebb and flow of the vocals in some modern pop punk- this is a track that takes your perceptions and grinds them up in a blender along with shredding guitars and pounding drums descending into a crushing breakdown, accompanied by raucous, chanting backing vocals! ‘Against the Tide’ doesn’t ask for the room to start spinning- it demands it!

Following that crashing opener is a tough challenge, but ‘All On You’ is more than up to the challenge, as the driving, undulating melody whisks you along in this riptide of a track, where the angst in the vocals is palpable and complimented perfectly by the grumbling bassline that pushes the track into guaranteed mosh inducing territory! The soaring vocals and bouncy melody of ‘Life Lessons’ are kept anchored by the gnarly bassline, making comparisons to Neck Deep impossible to deny. A little of the energy which had thus far been unrelenting dissipates in the second verse, but the insistency of the guitars carries it through to a delectably harmonious conclusion. ‘Making History’ follows, its staccato guitars used to highlight frontman Luke Smithson ‘s vocals, whose lyrics are bursting with imagery perfect for long summer road trips with your friends that plays with the pop punk archetype of aspiring for freedom from the confines of your hometown by relaying the dream so many of us have of experiencing the feelings of breaking out the other side: the perfect future-gazing attitude to accompany views of lit up cities from atop hills, as with its soaring power and anthemic grandeur that makes it a fist pumping anthem and far and away my favourite track on the record.

Rounding out the record in style is melodic closer ‘Rescue Me’, which gives the listener a glimpse of a softer side to this kick-you-in-the-teeth quintet. It is a truly heartfelt love song, with the crystal clear fragility of the acoustic guitar and soaring harmonies fringed with a little bit of zest that just prevents the track becoming too sickeningly sweet. The lyrics are peppered with endearing metaphors as the track builds into its spiralling, almost hymn-like crescendo that illustrates the huge potential this band have to produce stunningly beautiful anthems as well as down-to-earth, gritty pop punk bangers!

‘Moving On’ is a delight from start to finish: build on the foundations of classic pop punk as its finest, but with a veiled edge of something more raw and tenacious bubbling away under the surface that makes this a very exciting prospect of a band indeed. All being well, this could be the beginning of something for High Down that you definitely won’t want to miss out on!

‘Moving On’ is due for release on September 1st as a self-release across all platforms. The band have UK and EU dates in the works, to be announced shortly.