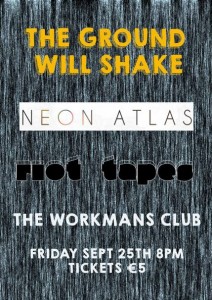 It would be trite to call the end of autumn in Dublin magical, but you can certainly feel an up-lift in the city’s mood as we wait for our annual Indian summer. Thankfully this September we’re seeing the usual 5 degrees extra Celsius. So it was with heat and optimism in the air, that I headed to The Workman’s, one of the city’s best venues to see some bands.

A three band set awaited me; Ground Will Shake, Neon Atlas and Riot Tapes. Each band is on the rock spectrum, but occupying varying spaces. So with so much on offer I presumed a big enough crowd would show up. Unfortunately that was not to be, it would be stretching it to say there was even a modest crowd in attendance. This did affect the performances, bands feed off their spectators.

The first band, Riot Tapes, played seven upbeat synth infused rock numbers. The room was at its emptiest when they were on, but it probably affected them the least. Their music was still full of passion and intensity. Lead singer, Elaine Doyle, exudes stage presence and has a voice that moves effortlessly between raspy and all-encompassing.

Highlights included strong renditions of their 2011 song Photograph, and a cover of Seasons by Future Islands. Both tracks showed off the group’s technical proficiency. At one stage the band called upon the crowd give them more of a reaction, fair play to the attendees they did, and in turn Riot Tapes upped their game.

Neon Atlas were up next. The all-male indie band from Cork had an air of distraction about them as they took to the stage, but I think this was affected cool, a trait shared by many of their alt-rock forbearers. Thom Yorke rarely exudes joy. 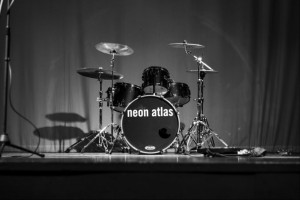 As their set kicked off I noticed that Kieran Ring’s vocals were sounding slightly too low, which was unfortunate as when they did come through you could hear the lyrical inventiveness in them. If this band played a smaller space, with more people in attendance, I believe that could have really hit it home. Tracks like Get Up and Juniper would sound larger and could really get the audience on their side. The drummer was their standout performer, he kept the whole show ticking over.

The main liners on the night were The Ground Will Shake. As they took to the stage you could feel their stage presence. This band melds rockabilly with standard rock, an interesting combination.

All the band members are showmen, with lead singer, Paul O’Connor, bringing a refreshingly cocky air to the proceedings. This is what you want from a lead, he is here to entertain you, but he also wants to have the craic. He had a great rapport with the lead guitarist, their back and forth was genuine and never strayed into the dreaded banter zone. The bass player held his instrument at knee length, I thought this was a really interesting style, I couldn’t take my eyes off it. 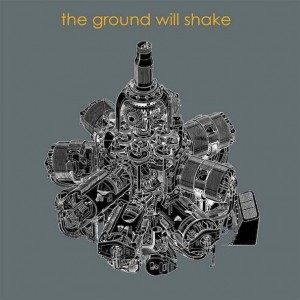 The Ground Will Shake wants to rev you up. They are all about the build-up and then pay off, for example Rolling Sixteen has a smooth intro but when it reaches its crescendo it’s all blood and guts. Similarly Reno uses the payoff method, again you’re eased into the vibe of the track before you’re up and dancing along to the climax. The crowd really got behind the band, and they were shouting One More Tune at the end.

All three bands put a solid shift in, and it is always good to see Irish bands being giving a platform. The folks in attendance seemed to enjoy themselves and most stayed on in the venue for more merriment. It is just a shame that more people didn’t show up on the night, if they had, they may have created an atmosphere that would have allowed these musicians to excel into their stride.