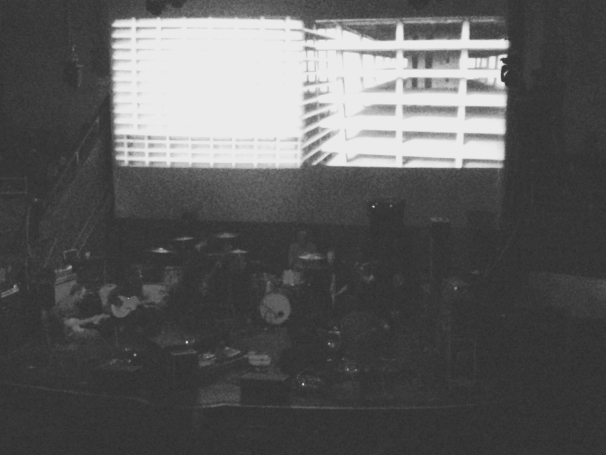 Montreal’s Godspeed You! Black Emperor have been at the forefront of instrumental rock music since the release of their debut album F♯ A♯ ∞ in 1997. Following a ten-year hiatus, the band released the 2013 Polaris Prize-winning LP ‘Allelujah! Don’t Bend! Ascend! three years ago. They continued their regained momentum by issuing their fifth full length LP, ‘Asunder, Sweet and Other Distress’, at the beginning of the month. Tonight, the collective play a sold-out Albert Hall in support of the new album.

First up was an expertly crafted drone piece from long-time Godspeed tour partner Total Life, which seemed suitable considering the extended amount of drone featured in the new album.

Godspeed’s set consisted of four extended pieces from their discography, bridged by a series of string-led drone intervals, followed by songs from Asunder to make up a lengthy two hour set.

GY!BE are known for their deafeningly intense live shows and you could see why as soon as they kicked in. The floors rumbled beneath us during the frequent crescendoes as I kept readjusting my earplugs. That’s what you get with five guitarists and two drummers in an eight piece band.

A ninth member of the band, Karl Lemieux, stood front and centre in the Albert Hall’s stalls managing the four 16mm film projectors displaying post-apocalyptic non-sequiturs on the screen positioned above the band. Part of Godspeed’s appeal for their cult following is their enigmatic nature, so having the super 8 footage being projected to deter the audience’s attention while the band played under low light only reinforced their mystique.

This was quite simply one of the best performances I’ve ever seen from a live band. Godspeed are a bucket list band, and one that you should make the effort to experience live, especially if you’re a even a remote fan of their studio work.