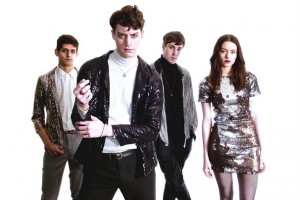 Manchester local band Girl Friend have announced a huge thirteen date tour of the UK to coincide with the upcoming release of their new EP ‘Arrive Alone, Leave Alone’.

The band has received a barrage of praise from the likes of DIY, The Line of Best Fit, Clash and even The Guardian for their electro-pop tunes. Described as a ‘sleek disco-glittered four piece’ the band have previously supported The Kooks, but are now heading out on their own.

Think bright synths, bouncing choruses and delightfully sinful-sounding vocals. Listen to the sultry tones of single ‘Stop’ below and get out to a show near you soon.

Girl Friend are set to play: