Paradise Lost – The Plague Within 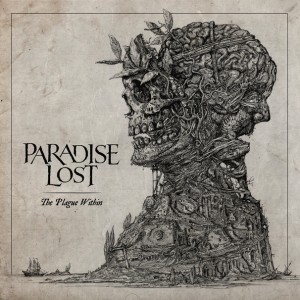 I once read an article about a British band making waves in Europe but with little or no exposure at home. That band was Paradise Lost and the story was backed up with a free cover tape that included the track ‘Hallowed Land’ and so started my appreciation of the Halifax based doom metal.

The album that the track came form was Draconian Times and it catapulted Paradise Lost in the upper echelons of Metal, somewhere they have stayed for the last two decades and it’s with stereotypical Northern stubbornness that the band have always looked to evolve, never wanting to replicate past glories and the Plague Within shows they have no intention of starting now.

The opening track instantly envelope the listener under a sonic blanket of doom-laden riffs drawn from past glories but with a new, distinct melodic feel. This sets the tone of the album whose subtlety is as refreshing as the darkness is familiar, most apparent on ‘Punishment through time’, the first song the band worked on when they reconvened with a conscious attempt to start with a clean slate.

Paradise Lost fortunes and musical direction have risen and fallen over the last two decades, which you could mistakenly attribute to their desire to mix things up with each release and risks like that can reap great rewards

I must admit that I was a little disappointed on the first listen but that was because I was living in the past and this new approach to the PL sound takes time to grow on you. It’s an album that doesn’t give up its genius easily, demanding that you put in the effort to reap the benefits.

To get an understanding of where this music comes from, take a train across the Pennines from Yorkshire to t’other side’ and observe the landscape your travelling though. An industrial scared land of old mills, stone buildings clinging to the hillside all covered by an endless stormy expanse of sky. This is a visual presentation of Paradise Lost music and I love both. Its this cold, harsh reality that is evident on ‘The Plague Within’ which to the uninitiated might sound negative but this doesn’t even scratch the surface of what PL are about.

That original article opened up a whole new are of music for me from the continent that has stayed with me, giving me a musical outlay that touches the darkest depth of my soul and Paradise Lost have been at the heart of that genre.