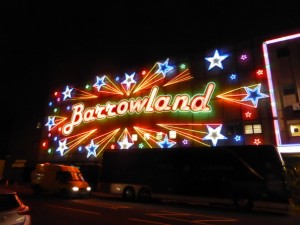 This was third time lucky for Future Islands and myself. I had tickets for their last two shows in Scotland but on both occasions work commitments got in the way. It was very much worth the wait.

For the uninitiated, Future Islands are a Baltimore, Maryland synth-pop band who released three albums on US indie labels before their infamous appearance on the David Letterman show made them an internet hit and introduced them to a wider audience. Subsequent album ‘Singles’ was released on legendary label 4AD and was considered one of the best releases of 2014. They apparently never stop touring. Their music has been compared to artists as diverse as OED, Joy Division, Simply Red and Pulp. On the long drive down from Aberdeen to Glasgow Barrowlands, I listened to a playlist I made with Future Islands tracks mixed with 80’s soft rock anthems. It’s the synths and the near unbearable emotional intensity you see. Future Islands are a band that could cover, say, Joy Division’s ‘Digital’ or ‘Hazard’ by Richard Marx and it would sound like Future Islands.

But first we need to talk about Dope Body. Tonight’s support group are a noise rock group whose singer Andrew Laumann shares a home in Baltimore with Future Islands Samuel T Herring. Dope Body’s sound is dominated by riffs disguised by heavily-distorted guitar and punishing math rock style drumming. Laumann is the focus though. Shirtless, he struts around the stage, long hair flying, like Iggy Pop fronting Rage Against The Machine. The showmanship veers into Jagger/Jim Morrison at times. On more than one occasion I find myself laughing. If this was a cock rock throwback act, I’d be sharpening the knives. But there’s a lot of interesting sounds going on. Full of unusual structures, some songs positively throb and expand, Laumann barking until his face turns red. It’s a short set full of excitement and it rocks like a bastard. The band say the last time they played in Glasgow, they played at legendary indie bar Nice ‘n’ Sleazy. Bet that was fun. Worth checking out if noise is yer hing. And drummer David Jacober is amazing.

The sell out Barrowlands crowd was treated to the sight of Future Islands bassist William Cashion and Gerritt Welmers (keyboards and synths) helping the road crew set up their instruments. Bet you don’t get that with Kings of Leon. We were kept waiting until 9:15 until the band in full emerge on stage to a welcome befitting conquering heroes. People love this band. In bars around the venue beforehand, their music was being played loudly on jukeboxes. Fans here know all the words to all the songs.

Everyone is here for Sam though. Samuel T. Herring is no longer a secret. That Letterman performance put paid to that, along with a non-stop touring schedule that has recently saw the band celebrate 1000 live shows. A band that has performed so much is bound to be tight. The verve and confidence on display doesn’t happen over night. And boy, does Herring have confidence. He literally does not stop moving the whole night. Along with some of the dance moves that have become familiar through TV and festival appearances he has mastered a gyration that is just damn nasty. It’s as if Robin Willliams had a go at replicating the video for Christian Aguilera’s ‘Dirrty’. Herring controls the audience like an orchestra conductor. He maintains the peace when building quiet tension, unleashes bedlam with a running arm signal. On opener ‘Give Us The Wind’, he unleashes that guttural, throat shredding roar. He licks the sweat from his arms. He acts out pulling off a mask at the conclusion of ‘Tin Man’. He actually slaps himself to the ground during ‘Walking Through That Door’. If you saw this man walking down the street, there’s no way you would think ‘He spends his evening making young women scream with his dancing’. Confidence is sexy, as we all know. There are strands of DNA present here that point to a more hardcore background. The chest thumping, the death metal growl, the pogoing. You get the feeling this band were once at a crossroads where they could have been Glassjaw but decided to be early Depeche Mode. This tension can be exhilarating. 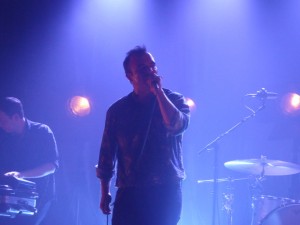 There is an earnestness that in other artists may be off putting but in Herring is totally endearing. He thanks the crowd repeatedly for coming out to see them. He introduces many of the songs by telling you what they’re about. He over emotes to a degree that would shame Rival Schools or Jimmy Eat World but manages to do so in a way that takes everyone watching along with the ride. We clap along to every chest thump, we holler as he squats on his haunches, face contorted into an pain ridden
gargoyle, perspiring profusely. You would have to have been standing about 20 yards back from the stage not to be touched by his flailing sweat.

Tonight’s setlist feature material from all four of the bands studio releases, latest album ‘Singles’ making up the lions share. ‘Back in the Tall Grass’ inspires the first mass singalong, the refrain ‘long way from home’ being picked up with glee. ‘Walking Through That Door’ cranks up the drama. ‘Balance’ and ‘Doves’ see unhinged dancing break out. Though no one in the venue can touch Herring for moves. At times, it’s like watching your geography teacher dancing for tips but he sure can wiggle his arse. Herring mentions that the band is writing new material, although none is played tonight. Recent stand alone single ‘The Chase’ is given a run out, along with it’s b-side.

Of course it’s breakthrough single ‘Seasons’ that gets the biggest reaction of the evening. You can’t hear Herring singing as the crowd take over, singing every word and dancing wildly. At the end, the ovation is like that of having watched a football team score a late winning goal. Herring strolls the stage, smiling warmly, almost incredulous. ‘Tin Man’ and ‘Spirit’ end the main set strongly, both sparkling pop songs. The former could be pre-‘Different Class’ era Pulp, it’s that good. 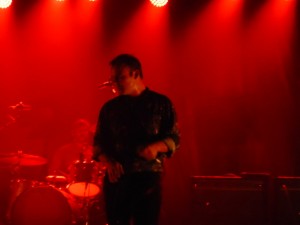 The band return for an encore to thunderous applause, Herring mercifully having changed out of his sweat-drenched shirt. ‘Inch of Dust’ is another hugely emotional synth pop track, Herring acting out every word. The band finish with regular show-ending combo, the roller coaster ride that is ‘Vireo’s Eye’ and the sweet love song ‘Little Dreamer’ from their very first album.

This was a hugely fun show. People were dancing from pretty much start to finish, even during the slow songs. On performance alone, Herring has got to be up there with some of the best front people around at the moment. He has the magnetism of Jarvis Cocker, the ‘otherness’ of Morrissey, the everyman intensity of Springsteen. Luckily for us, Future Islands seem to always be on tour. Be sure to catch them. Dress up for it. Get on your dancing shoes. 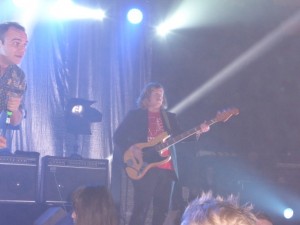 The album ‘Singles’ is available via 4AD