Slam Dunk 2018 is soon upon us and once again it has another insane line up. As we inspect the line up we continue to see returning bands make their way further up the bill. Notable artists this year who have leapt up the billing are Creeper, As It Is, Northlane, PVRIS, Roam and Knuckle Puck just to name a few! But all of these bands have to start somewhere, which is why we’re bringing you our top three picks from this years Rocksound Breakout Stage, who we have no doubt will make a lasting impression on the festival!

Whilst Holding Absence might not be your conventional headliner for main stage at Slam Dunk festival, they’d be a perfect candidate for the Impericon stage. After smashing onto the scene with their unique, post-hardcore sound in 2017 with the release of Dream Of Me and Permanent, they have continued to release huge singles and most recently, a split EP (This Is As One) with fellow Slam Dunk players Loathe (featured on this year’s Impericon Stage). Combine this with a relentless drive to tour, unique sound and growing dedicated fan base, you get one of the most exciting UK acts to date.

After opening tours for bands such as Blood Youth and Young Guns, playing Download festival and recently completing their first full EU and UK tour, it’s almost a guarantee that you’ll be getting the best Holding Absence have ever been at this year’s festival. Energy, passion and intensity like no other, this is not the first time you’ll see this band on a Slam Dunk line up.

FFO: Thrice, Being As An Ocean, Casey, Hundreth

Another band forged by monster touring schedules, hard work and catchy Pop Punk stylistic is Manchester’s Milestones. Milestones released their debut album, Red Lights, in February of this year, after honing their craft on the road. Following the release of their 2016 EP Equal Measures, the band hit the seemingly never ending road, totting up an extremely impressive 133 shows across 11 countries over a 15 month span, from the US and Canada to Germany and Italy.

With songs such as BitterSweetHeart and Paranoid, as well as an impressive touring schedule and back catalogue, you’d be crazy to miss this band before they hit meteoric levels of popularity and like bands like As It Is and Neck Deep, it’ll be sooner than you think. You’ll be sure to hear these on your radio and see them on your magazine covers and festival bills very soon.

FFO: Neck Deep, Trash Boat, Boston Manor, As It Is

Chapel bring the pop sensibility to this years Slam Dunk festival. Following in the footsteps of more possibly commercial bands and past headliners such as Panic! At The Disco, Fall Out Boy and All American Rejects, Chapel are not afraid to bring tasty melodic lines, big guitar lines and funk drum parts and combine them with an electronic pop meets Pop Punk characteristic.

They bring a new and unique flavour to what can sometimes be considered a heavily over saturated stylistic, whilst still maintaining fundamentals that will allow you to jump up and down and get on down for a good boogie. With an overflowing amount of positive energy and a very individual spark to them, it’s without a doubt that Chapels will rise up the Slam Dunk ranks, especially if epic singles such as Don’t You Love Me and Caught Up are to go by!

FFO: Panic! At The Disco, Paramore, As It Is, Fall Out Boy 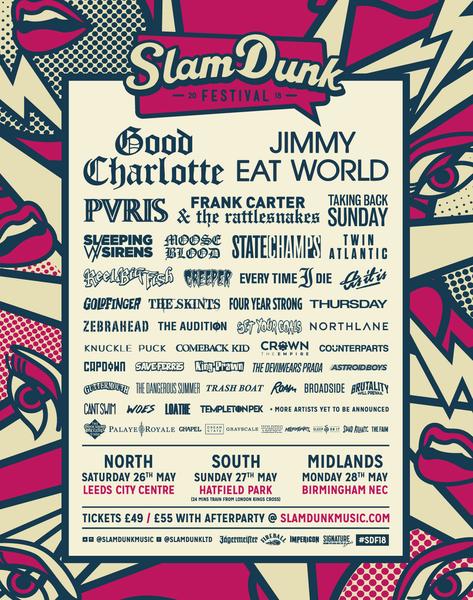