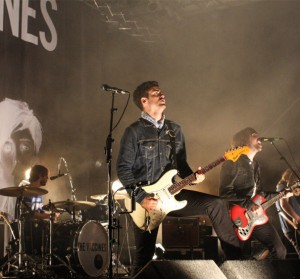 Most people know Freddie Cowan as the guitarist of the successful Indie band the Vaccines. They have provided us with some classic hits such as ‘If you wanna’ and ‘Teenage Icon’ and are currently on tour in America.

What most don’t know is that Cowan is not only a musician, but also a fashion designer. He is a member of the MR PORTER council and has his own range called ‘Basic Rights’. It may come as a shock to people, but Cowan has actually always had fashion on his mind. In an interview between Cowan and I he told me that he had always designed clothes for the band. “I realised there was kind of a common thread in the things that I wanted but I found it very difficult to find, so I started making my own clothes.”

The guitarist’s fashion sense has always been a 1950s style. With Elvis being his fashion icon, his favourite outfit to wear is his 1950s black gabardine jacket, black Acne Studio skinny jeans and a white gabardine shirt. “I was very into 50s fashion because I felt like it was the first big cultural shift of the twentieth century,” he says. “I mean obviously there was an enormous fashion shift pre twentieth century but up until post second world war. There was something just so loud about 50s fashion which I guess came from Elvis and developed to rocker billy. You’d see a lot of gold, almost like French royalty”.

Cowan’s fashion line Basic Rights has the help of David Chambers, once a tailor for the magnificent David Bowie and David Hockney. However, Cowan says that fashion designing isn’t his priority. “I’ve always been interested in it but it’s never really been the focus for me. I mean, it still probably isn’t the focus for me but you know I’m still extremely interested in it,” he says. “It’s something that everybody participates in whether they are incredibly interested in it or have no interest in it, everybody participates in fashion.”

There are many artists who have gone down the fashion route like Kanye West and Olly Sykes for example, but what is Cowan’s aim in the fashion industry? “The aim isn’t to create a global business, the aim is just another creative outlet for me. Some of my partners may feel different but to me it’s just a creative outlet and something to do,” He says. “I really just like getting things the way I want them. It’s not crazy to think that someone else hasn’t thought about your ideal wardrobe, ideal guitar, ideal anything. Why should anybody come up with it? It’s perfectly reasonable to think actually nobody has done anything exactly the way you want it yet so you might as well just do it yourself.”

You can catch the Vaccines at this years Reading and Leeds festival in August.