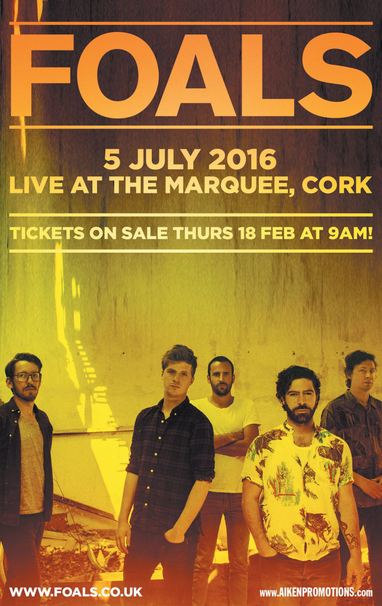 In the midst of their arena tour, and the morning after their hugely successful (and sold-out) 3arena show, Foals have announced that they will be returning to Ireland to play Live at The Marquee in Cork on July 5th 2016.

The announcement comes on the back of their critically acclaimed and award-winning new album What Went Down. It commanded a Top 20 chart position for four weeks in the UK and shortly after the album’s release the band won “Best Act In The World” at the Q Awards. Made with the help of producer James Ford (Arctic Monkeys, The Last Shadow Puppets, Mumford & Sons, Florence & The Machine), What Went Down is an exercise in balancing frenzied, primal aggression with powerful, naked vulnerability. Tackling themes such as cultural identity, generational anxiety, cynicism, pessimism and heartbreak, lead-singer/guitarist and lyricist Yannis Philippakis is ambitious and quick-witted as ever.  Famed as a masterful and charismatic frontman, Yannis and band members Jimmy Smith, Jack Bevan, Walter Gervers and Edwin Congreave are bringing their show to even bigger stages this year, having just done a headline show at London’s Wembley Arena to rave reviews, and secured a coveted headline slot at this summer’s legendary legendary Reading and Leeds Festival.

Foals are set to be one of the highlights of this summer’s Live at The Marquee Festival, so get your tickets for the <5000 capacity venue now, available from all Ticketmaster outlets nationwide, via phone on 0818 719300, or online at www.ticketmaster.ie.