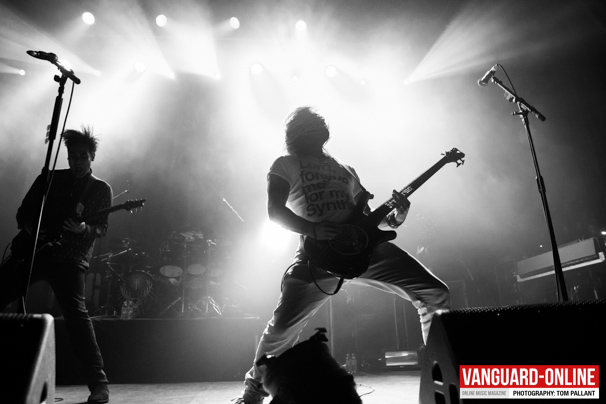 Walking from Manchester Oxford Road station on Saturday it’s evening you’d get no prizes for guessing which gig was happening this evening at the newly named O2 Ritz, as even from the 2 minute walk across the road, there are floods of Fightstar t shirts lining up along the street waiting for the doors to open.

Kicking off proceedings are Kingston-upon-Thames rockers, Arcane Roots. Beginning with a mellow guitar & vocal interlude to the set couldn’t prepare the humble yet growing crowd for what they were about to witness. As the every smartly dressed Andrew Groves soars with ease in falsetto we’re lulled into  the notion that this may be the soft rock contrast to the metal anthems of Fightstar, but how wrong could we be. Bursting instantly from vocal led breakdowns to crushing bass driven riffs and endless head banging from the band we’re thoroughly warmed up right from the outset. With essence of Biffy Clyro mixed with a hint of Letlive. partly due to the appearance of Groves, but also the line up and energy in the lyric and performance its hard to believe this band are the support band. 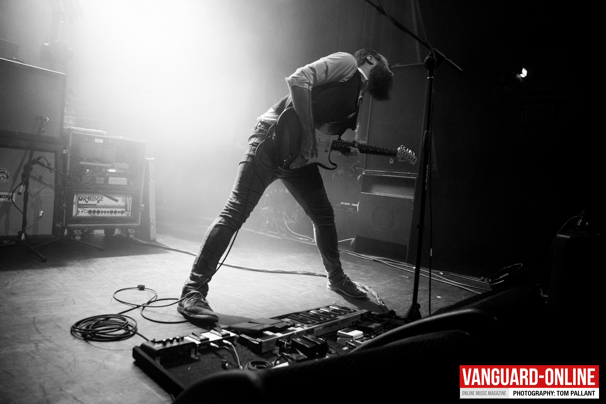 Having released their 4th EP only 8 days ago there is already a familiarity with their set amongst many of the fans, raising a big cheer when announcing they were playing ‘Slow Dance’, which driven by its sawtooth synth riff replicated in bass and guitar prompts the first of what is bound to be many moshpits. One think this band isn’t afraid of are their instrumentals, which tends to be a struggle for many artists wanted to keep interest in large instrumental sections, but Arcane Roots have absolutely no trouble at all, seeming to make guitar solos and breakdowns last only a matter of seconds before Groves returns from wherever he happens to be onstage to hit us again with his breathtaking vocal ability.

Having toured their first studio album ‘Blood & Chemistry’ extensively for 2 years, I’m sure it won’t be long before their heading up another headline tour with all this killer material that they have rolled out recently. To close their set, they hit us hard with the anthem ‘If Nothing Breaks, Then Nothing Changes’ ending with what is easily a 10 second long scream left ringing round the roof the O2 Ritz. 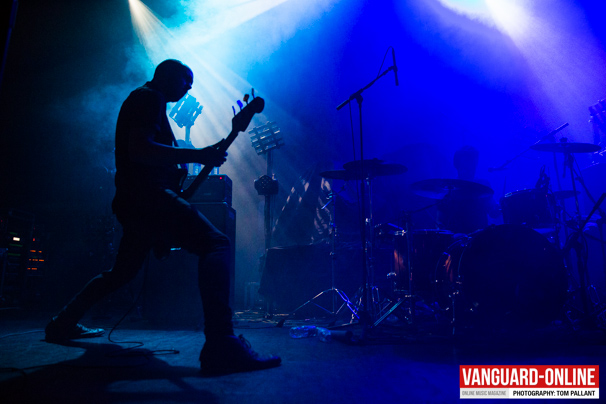 A low rumble signals emerging from the PA signals something is happening, and as it grows louder Fightstar emerge from backstage in silence, reaching the a climax before breaking into the mellow intro to “Sleep Well Tonight”. This may have been seen as a surprising song to start to a start but turns out to work perfectly with frontman Charlie Simpson floating between his chest voice and falsetto before screaming his heart out showing his extreme vocal versatility. “Has anyone bought our new record ‘Behind the Devil’s Back?’ in the past week?” announces Simpson, met with an almighty roar from the Manchester audience. “Good, well this is a song of it!” he adds before smashing into the opening of the djent-fuelled ‘Sharp Tongue’ one of the singles off their new release.

One of the standout things Fightstar have going for them is the dramatic contrasts between their verse, choruses, bridges, intros, outros etc. creating melodic choruses with everyone singing followed instantly by crashingly heavy verses with dirty screams, and its so relevant in all of their work. ‘Paint Your Target’ is an outstanding example of this as Alex Westaway (guitar) picks the chorus drowned riff give the fans a signal that its all going to kick off again, and they didn’t disappoint. The mixture of new and old material is extremely refreshing to hear from a band who are promoting their latest album, but not shying away at all from the popularity of their previous work. 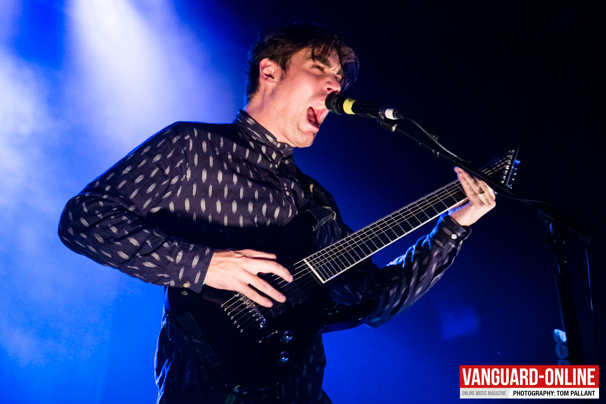 As a session guitarist enter the stages, Simpson removes his guitar and takes the mic off the stand, about to demonstrate his superb frontman capabilities announcing “Here’s another off Behind the Devil’s Back, it’s called Snakes Start To Sing” yet again met with an enormous noise from the audience. Moshpits have been an integral part of this evening already and even more so in this next song with bodies flying anywhere and everywhere. Simpson is rendered useless in the pre-choruses with the sweaty and notably hairy crowd screaming the words at the top of their lungs.

10 years on from the release of their first EP, one of the most well known Fighstar tracks is up next still as popular as ever as ‘Phalahniuk’s Laughter’ prompts yet more moshpits to develop all over The Ritz. “Let me hear you sing it!” exclaims Simpson and the crowd willingly obliged, screaming the lyrics back at the stage when the chorus breaks. 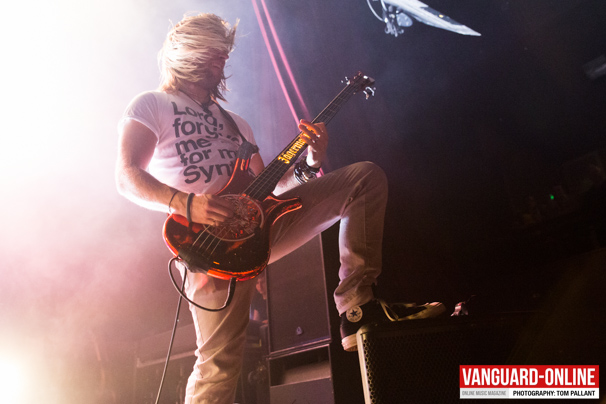 With absolutely no break for the increasingly perspiring crowd, Simpson cues them to “OPEN IT UP!” with bassist Dan Haigh gesticulating as they prepare to smash into ‘Deathcar’ violently screaming their hearts out. The Jagermesietr sponsored band aren’t afraid to show their partnership with the drinks company with the logos emblazoned all over drummer Omar Abidi’s kick and toms, as well as Haigh’s bass and illuminated fret inlays, who also bears a t-shirt saying “Lord, Forgive Me For My Synths”. One thing that does seem to be missing from the set are potentially the most well known Fighstar tracks Mercury Summer, The English Way, We Apologise For Nothing, and Never Change, which can be seen as the more pop-orientated track and maybe chose to leave behind some of these traits to focus on the more heavy riff drives tunes. 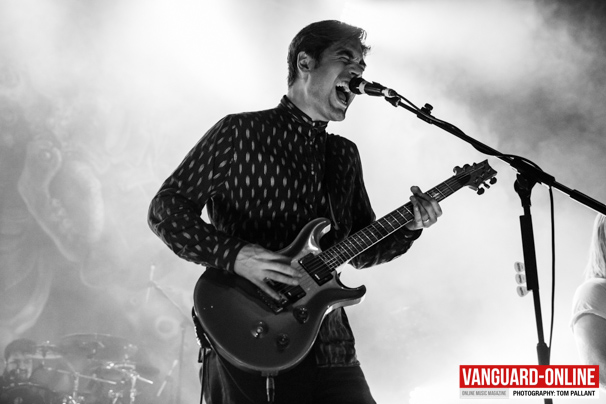 After having seemingly ended the show by exiting the stage, the inevitable shouts for “ONE MORE SONG!” ring out through The Ritz and as if it was rehearsed, Fightstar re-emerge. It wouldn’t be a full show without playing “Animal” their huge single released earlier this year, well and truly turning the crowd into animals for one last time! Following that, they take us back to 2006 and their debut studio album Grand Unification and treat us to a beautiful rendition of ‘Mono’. The gradual build throughout makes for an incredibly euphoric showing that they know truly how to close a show in style with yet another session guitarist joining the stage! By the end all 6 musicians onstage are all crowding round each other showing the connection between them all, those in Fightstar, and those not still playing the extensive outdo to Mono. Having been away from the music scene for a while, it’s safe to say that Fightstar are most certainly back with a bang. 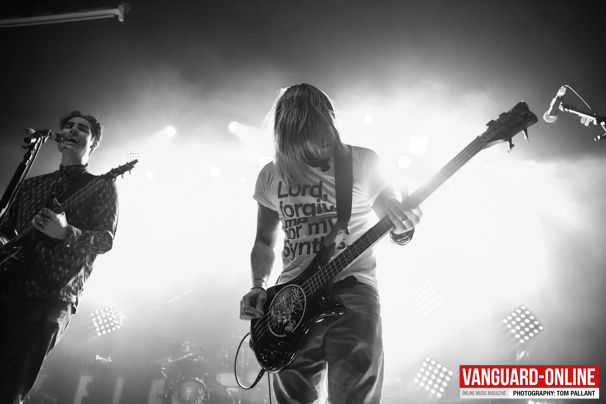