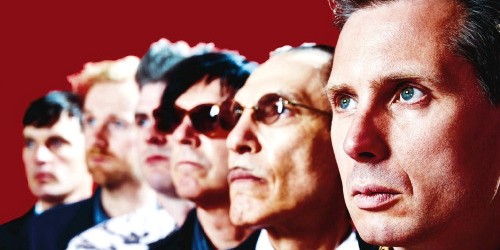 I wasn’t sure what to expect from FFS, the perfectly-named collaboration between Franz Ferdinand and Sparks. I’d listened to (and loved) the album but how was this going to work? Would they play their respective old stuff? If so would the other band go off for a pint?
It was the hottest day of the year so far (unbelievably it would get even hotter) and the crowd was gathering in little clumps under the air conditioning vents of the art-deco former cinema. It as fairly easy to sort people by whether they were here for the FF or the S, those not wearing sweaty T shirts declaring their allegience could be identified by age.
FFS kicked things off with Johnny Delusional – the bombastic opening song on the album. They are slick and energetic. All the FFS songs: Call Girl, The Power Couple, Things I Won’t Get; sound big and bright. But perhaps unsurprisingly it’s songs from each band’s back catalogue that get the crowd going.
Again, there were slightly different pockets of the crown bouncing to Michael as there were to The Number One Song in Heaven but if you didn’t know this was two bands welded together, you wouldn’t see the joins. There is no jarring gap between FFS, Franz Ferdinand, and Sparks – each song performed by the whole band sounds like it could have come from the same band. Franz Ferdinand were always from the same tradition of art-rock as Sparks but I didn’t expect the two bands to gel so perfectly.
The big hits are here, Take Me Out and This Town Ain’t Big Enough for Both of Us. Russell Mael, in spite of being well into his free bus pass years, still has that remarkable falsetto. It really was an honour to hear him sing live. Alex Kapranos’ baritone impressed (I’m a sucker for a nice baritone) and complimented Mael perfectly (or Mael complimented Kapranos – neither band is the junior party here).
After a storming, packed set, the band finished with Collaborations Don’t Work. It takes a great deal of charm to carry off something so knowing and slightly smug, but FFS have that charm.

See review of FFS at Glasgow School of Art