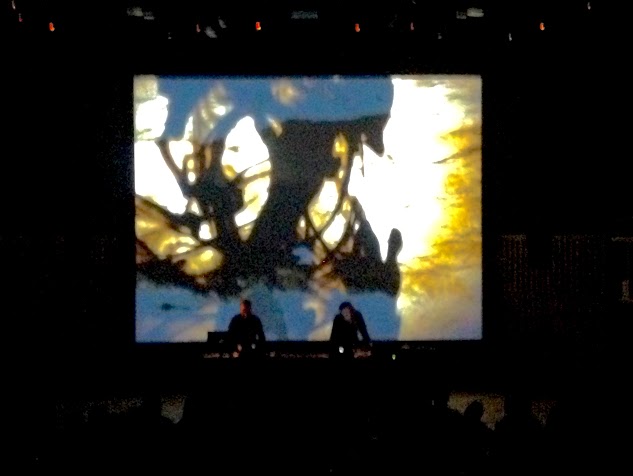 Alongside Fennesz is long-time collaborator, video artist Lillevan, whose abstract visuals compliment his music beautifully. It’s the first time the duo have performed together in the UK.

After an impressive A/V set from Edinburgh-based experimental duo Dalhous, which was probably the closest thing to resemble a performance from Boards of Canada that I’ll ever get to see, Fennesz and Lillevan take the theatre’s stage, equipped with guitar and MacBook.

With each ‘track’, Fennesz layers his melodic ambient and drone effects to produce a live remix of Mahler’s work, topped with shoegaze-esque guitar riffs, until the room is filled with a wall of sound with lengthy crescendoes. The original samples are seldom recognisable, with Fennesz also infusing elements of his own back catalogue of recordings throughout the set.

Much like Fennesz’ compositions, Lillevan’s ever-changing layers of visual effects draw inspiration from various aspects of nature, and are powerful and cinematic enough to put anyone into a trance-like state throughout the continuous performance.

The two artists work together perfectly to create an intensely rich audio-visual experience that is not to be missed.