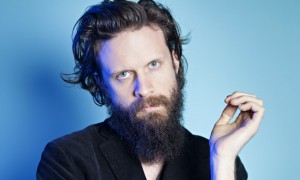 It’s difficult to believe that Josh Tillman, aka Father John Misty, was once the drummer for indie folk outfit Fleet Foxes. At tonight’s sold out show at Glasgow’s O2 Academy, the impressively bearded Tillman prances and thrusts his way through an electrifying set comprising both his albums, 2012’s Fear Fun and 2015’s critically lauded I Love You, Honeybear. With dance moves like Jarvis Cocker and a voice reminiscent of John Denver, the crowd is entirely in Tillman’s command, whether they are rapturously cheering during The Ideal Husband or in spellbound silence while Tillman plays guitar on I Went To The Store One Day.

The show opens with the plaintive Every Man Needs A Companion, but it’s not long before Tillman gets on his knees to sing When You’re Smiling and Astride Me. Tillman is both affecting and hilarious, an arched eyebrow and suggestive hand gestures accompanying his irreverent, story-telling lyrics. In a move befitting his Messianic persona, Tillman greets the barrier to shake fans’ hands and let them touch his hair and clothes.

Tillman’s band are on scintillating form as they power through a set list that demonstrates the range and diversity of Father John Misty’s music. The raucous, country-tinged I’m Writing A Novel has the entire crowd dancing shortly before the funereal,  über-sarcastic Bored in the USA. A bouquet of roses is thrown on stage, which Tillman poses with coquettishly like a beauty queen. By the time the crowd is singing along to apocalyptic title track I Love You, Honeybear, it feels almost like a religious experience. There’s even a cover of Rihanna’s Kiss It Better from her controversial 2016 album ANTI, “the most beautiful song I ever heard about going down.”

With songs and a live show as dazzling as this, only time will tell if Father John Misty will play shows this small again. However, it seems likely that Josh Tillman will somehow manage to make any show feel as intimate and monumental as this.