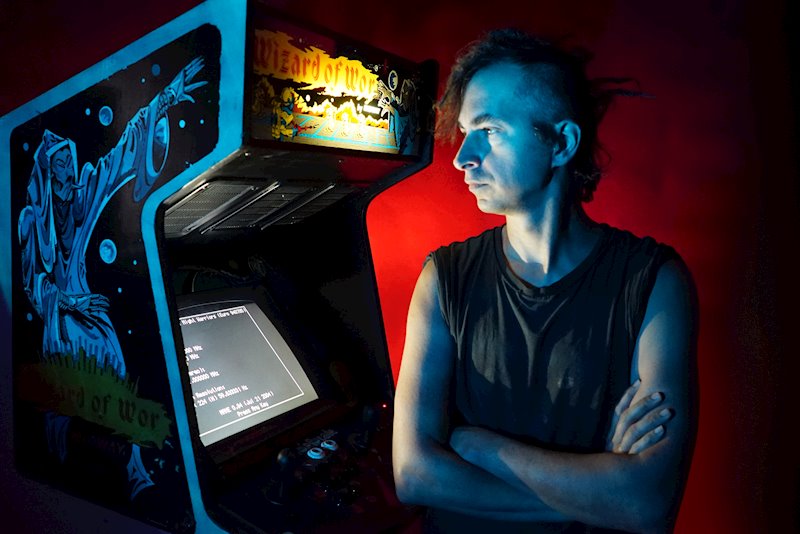 I have spent the last few days allowing the gentle tinkling of various pianists gently trickle over my mind and through my soul. I knew that was going to come to an end when I started to listen to Euringer, project of James Euringer, lead singer of band Mindless Self-Indulgence. Mindless Self-Indulgence are a band I stumbled across the internet a few years back, they are like the evil twin of the Mighty Boosh. They have the most amazing MSTRKRFT like dance beats combined with a psycho-pop scream mentality, and a real knack for a melody. Most striking of all are the lyrics, the self-hatred and self-abuse, the obnoxious attitude, it doesn’t feel like a place to stay in for too long, and yet at the same time, there is something alluring about joining them in their mindless self-indulgence. My apprehensions about the Euringer album were given a concrete form immediately after what sounded like the voice of a young girl giving a three minute warning about the ‘harmful’ content we were about to hear, spelling out each type of harmful content explicitly. Already you felt like your ears were being defiled. So what is it that Euringer has to offer that you might be better off completely avoiding? Well more screaming, more beats, and a lot of mash up, in this album Euringer is not keen to keep things constant, the music drifts into dialogue and film scores, and then comes back again. In this way, its not an album with tracks, but rather a soundscape, a kind of museum of sounds and music. I don’t know why but his insertion of a cover of Kate Bush’s ‘Wuthering Heights’ half-way through was hilarious and completely appropriate. It was at this point that I started feeling like this album was turning into something special. And better it got, it segued into a rocking track, something with the energy of the The Fratellis ‘Chelsea Dagger’ and the Scissor Sister’s Laura. One thing I’ve always wondered and worried about Euringer is whether there’s a kind of subtle political line lying underneath all of this stuff, a barely perceptible saving grace that you’d have to invest your time in to discern. I don’t know. I’m still wondering. Equally, I wonder, whilst the album clearly speaks to children and adults who are traumatised, the victims of chronic abuse, with lines like ‘damaged goods’, ‘beautiful scars’, ‘the medicine does not control me’ does it do anything to help people in that situation out of their predicament? Or is it just a big underground warehouse party for those who feel fucked by society and  that the fucking is never going to stop? This is the allure of the album, the celebration of mindless self-indulgence. The envy and anger feels like a boot back into the balls of society, not just of those who abuse, but of those who sanctimoniously judge behavioural responses to coping with the abuse. Euringer would go well together with on tour with Fischerspooner, both being musical connoisseurs of sexual hedonism. He says the word ‘bitch’ quite alot, and I don’t like that. Time to get back to that piano stuff I think.