Kraak is a great venue and one of my favourites. Hidden down a tiny dark alley in an old textile warehouse on the fringes of the Northern Quarter, it houses a good sized room for gigs and club nights and then a separate space for exhibitions which is also a fully equipped photo and film making studio. Originally, this night was scheduled to take place at the now defunct Roadhouse, which is where Sammy Powell’s The Beauty Witch were primarily based, but Kraak would make an ideal new home without a doubt.

TVAM, Joe Oxley from Wigan, produced a curious solo set aided by a backing track of drums and bass, amongst other sounds, with an old school TV playing a collage of VHS style clips. Each set of clips began with the song title being displayed and at one point even the lyrics. Joe played a garage/surf rock style guitar perfectly in sync with the visuals which for the most part worked pretty well. There was a couple of times when the guitar wasn’t present in the sound or was very minimal, so Joe would be watching the TV waiting for his cue which made it feel like everybody was watching a lad playing Rocksmith on his Xbox. Because of this I couldn’t help but wonder what it would be like with a live drummer and bassist present and the clips being played on a backdrop á la Grails. Grails, who hail from Portland along with Eternal Tapestry, also use their backdrop for VHS style clips that are actually a little more engaging, but in doing this it would make the whole point of TVAM redundant given the name of the act. I’ll certainly be checking him out again.

Before Eternal Tapestry took to the stage there was a set from Paddy Shine of Gnod, who are an art collective from Salford based out of Islington Mill. You won’t ever hear separate tracks in a set from Paddy or Gnod but instead one long piece of music that rumbles along with dark intensity. It can sometimes take a certain level of stamina, or level of high, for the listener to totally buy into the monotonous roll of same. It’s no coincidence that Shine’s followers are bohemians with rat tails. Having said that, a half hour set from Paddy Shine or Gnod is always a welcome addition to a night. After the set one onlooker was heard to say; “..ever rang a fax machine by accident..” Which was a little unfair really, but I take his point.

As mentioned, Eternal Tapestry are based in the indie rock mecca of Portland, Oregon. They play an engaging level of experimental psychedelia that at times sounds like an improvised jam with a superbly solid rhythm section from drums and bass. Most of the songs on display were of great length and at one point the bassist, Krag Likins, played the heck out of a repetitive line that he kept going for a insane amount of time. Although I enjoyed the set most of the time the bands output seemed to hang in the background, although pleasantly, without much cutting through the haze that is produced. 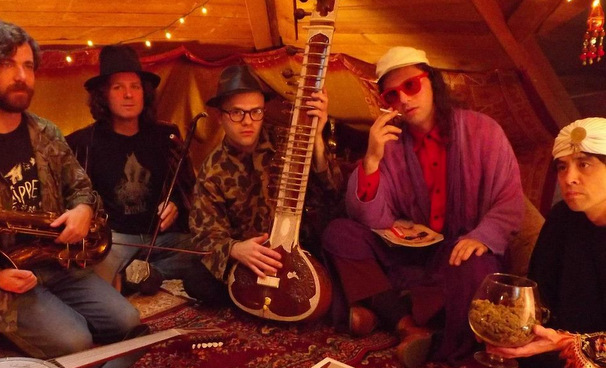