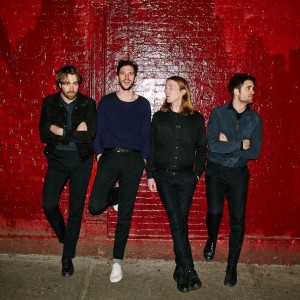 When the Vaccines put out their debut album What Did You Expect? back in 2011, they were pounced upon as the saviours of indie music all round. Single ‘Norgaard’ was a blast of indie-rock potential, tightly wound up in under 2 minutes, and the band had BIG THINGS TO COME written all over them.

Fast forward a few years, another album and EP, and you have The Vaccines latest release, English Graffiti. And does it live up to expectations? The band have blossomed since their debut, that’s for sure. Second album Come Of Age teetered in new experimental waters, but their third record swims out into them confidently, an attitude only acquired after a further two years as band, and an exposure to other genres like pop and hip-hop by frontman Justin Young. He had some interesting things to say of the album when interviewed by NME – “We wanted to make something that sounds amazing next year but terrible in 10 years!” Perhaps this focus on sounding in the moment explains how the album actually sounds like a mash-up of everything from the eighties to flashes of the futuristic.

There’s more than the dash of pop in the new record, with track ‘Dream Lover’ crafted as a pop-rock anthem, with its sauntering guitar riff as the main attraction. Opener ‘Handsome’ perhaps sticks the most closely to the indie formula of their past albums and still offers a good indie thrash, but it’s brighter and, like the lyrics suggest, more sugar coated. ‘Minimal Affection’ gets caught up in its use of psyche-pop synths to create a schmaltzy little number, whereas breezy summer ballad ‘(All Afternoon) In Love’ showcases Young’s new mellowed out vocal style. ‘Want You So Bad’ ticks into a lingering synth infused love song too, with ‘Maybe I Could Hold You’ following suit. Title track ‘English Graffiti is an muted reflection on a rocky relationship, but the stand out track of the album is ‘Gimme A Sign’ if only because it’s like nothing else they’ve released before – the chorus is made to belt out in arenas. It’s almost pure pop – just an aura of indie hanging around the edges in the subtle acoustic guitar – and surprisingly, it works for them.

Lyrically, the album goes over old wounds; Young is still unlucky in love, but the full extent of his heartbreak is lost a little against the dizzying marriage of indie, pop and psychedelia on English Graffiti. What did we expect from the Vaccines? Perhaps not quite this, but it’ll do nicely.

English Graffiti is out now via Sony Music.

You can check out the video to ‘Dream Lover’ below: