As a loyal fan of this festival, I can safely say that End of the Road Festival’s tenth birthday celebrations were nothing short of spectacular. With the weather slightly less sunny than in previous scorching years, the soul was kept warm by a weekend of heartfelt folk, fuzzy psychedelia and epic main stage shows. Not to mention the beauty of the Llama Tree Gardens, venue for the festival, with its peacocks, parakeets and renaissance statues, the EOTR team went many extra miles to celebrate their 10th anniversary. Our senses were treated to a sparkling forest of hidden art, with lyrics carefully stencilled into leaves, hundreds of tiny origami birds flying out of a gramophone, a miniature festival model set inside a mini temple and a giant papier-mâché bear riding a bike over a moon. 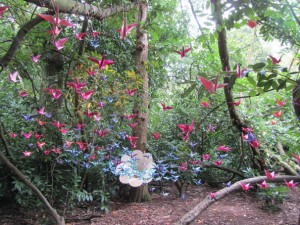 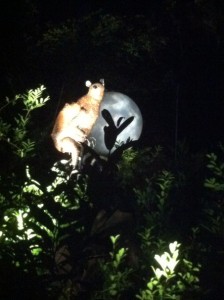 It’s not often that a midday set on a Friday stands out as a festival highlight, yet Ryley Walker’s tight set, with its journeying Television-esque guitar and fusion of jazz-folk did exactly that. The small group of five, sat closely around each other on one side of the stage, gave it an intimate, basement room feel and front man Ryley Walker loudly counts in his band, carelessly lost in the breezy, hazy, fusion of blues-folk he has created. “Funny Thing She Said’’ is strident and powerful and Walker’s mesmerizing vocals, resonant of Jimmy Page or Peter Green, wild hoots and yelps, drift out to a pleasantly startled, now enraptured audience. I leave feeling truly calmed and inspired, ready for the weekend ahead. 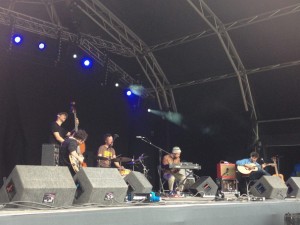 Friday night’s headliner burst onto the Woods Stage in a spiralling backdrop of multicolours, strobe lighting and their signature synth-drenched rock. Tame Impala have brought psychedelia to End of the Road 2015, in all of its shimmering haze, cosmic fuzz and signature discernible lyrics. ‘‘Mind Mischief’’ is heavy and dirty enough for my liking and ‘‘Feels Like We Only Go Backwards’’ deliciously heady, but after half an hour I begin to feel much like an over-worked bee who has become weighted down by an abundance of sickly sweet pollen. I float off in search of some midnight ping pong and wonder if, behind all the heavy reverb and long hair, Tame Impala are really capable of following up the headline slot graced by the Flaming Lips only a year before. 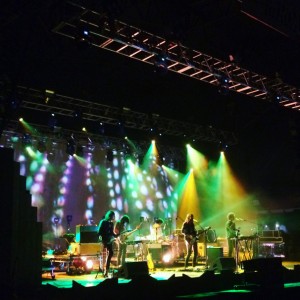 Still no sunshine but Saturday brought the warmth of mother-and-son duo Madisen Ward & The Mama Bear to the Tipi Tent. Hailing from Kansas City, the pair are a delight to watch as they perform the foot-stomping, ‘‘Whole Lotta Problems’’, equipped with two guitars and two ragtime voices. Madisen’s mother Ruth brings the crowd to a quiet standstill as she performs Fleetwood Mac’s ‘‘Dreams’’ with an effortless grace and a maturity of voice which captures the audience in a snug, reassuring embrace. 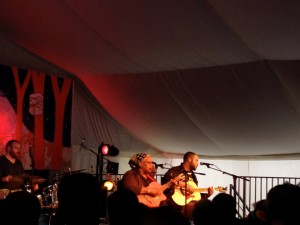 Later on in the evening My Morning Jacket play under a setting sun at the Woods Stage. Being relatively unfamiliar with their material, I am drawn to the sound of sliding guitars and the nods to country music in ‘‘Golden’’ and ‘‘In Its Infancy’’, which immediately have me hooked as I find myself hanging over the front bars, enchanted by Jim James’  soaring vocals and cool presence. It soon transpires that this is a band with many hypothetical strings, who treat their crowds to a mass of fantastical sounds and styles; from blazing, heavy guitar riffs, to airy, epic, summer-evening sing-a-longs and bouncing electronic drum samples. I have since begun to wade through their 10 year catalogue of material, with visions of Jim James’ flowing curls blowing in the wind, thumbs up in the air in an extravagant embroidered black jacket imprinted on my retina. Sigh. 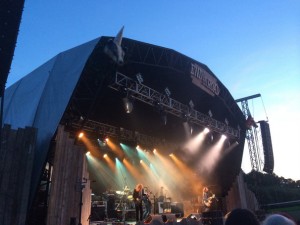 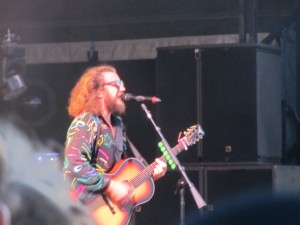 It is the last day and the sun has come out in full force, bringing sunburn, ice creams and tears along with it. The Garden Stage provides a steady stream of retro American folk, nostalgic vocals and bluesy guitar hooks throughout the afternoon with acts Kevin Morby and Delines. As the night draws in, Future Islands, one of the most eccentric and exciting bands to have burst into the End of the Road this year, initiated what can only be described as one of the most bizarre crowd reactions ever witnessed. Imagine: a sea of middle aged men bent at the knees, kicking their shins out and waving their fists around them, in (a not so convincing) imitation of lead singer, Samuel T Herring. In addition to this, now imagine the gut-wrenching, soulful screams of Herring as they burst over bouncing 80’s synths in ‘‘Seasons (Waiting For You)’’ and one friend of mine somewhere in the crowd crying unstoppable tears of joy.

Planets, stars and galaxies away from Future Islands is Sam Amidon’s spellbinding, finger-picking folk at the Tipi Stage. Amidon and his band recreate traditional folk, seamlessly bringing together the guitar, banjo and violin with sound effects, keys, whistles and bells. ‘‘Short Life’’’ and ‘‘Blue Mountains’’ are attentive, atmospheric and fascinating, casting you to the countryside of Vermont and your mind to tales of childhoods, murder and love. 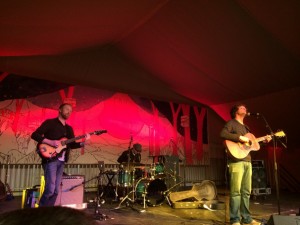 Be sure to keep an eye out for next year’s line up, as this is one festival any serious music lover can rely on. It seems that a few people must agree, as the 2016 Early Bird tickets have quickly sold out in the few days following the festival!