Delirium is Ellie Goulding’s 3rd studio album to date, hot on the heels of “Halycon” in 2012.

Since breaking on the scene in 2010, it has been somewhat of a whirlwind rise to the top for the Herefordshire star; she has sold over 20 million records, has two #1 albums, won two Brit Awards and has online Vevo video views and streams in excess of one billion. 2015’s hit single “Love Me Like You Do” was a worldwide Number One, reaching top spot in 70 countries and breaking the record of most streamed song in one week.

So what is next for the Ellie?  Some artists might be inhibited about where to go after such success but Goulding had no doubts: make everything bigger, better and braver. Appearing on Major Lazer’s “Powerful” earlier in 2015 seemed to be a taste of things to come.

With Delirium, Golding has taken a conscious change of direction as an artist, “A part of me views this album as an experiment – to make a big pop album,” she says. “I made a conscious decision that I wanted it to be on another level.” 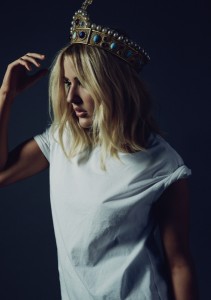 And another level it certainly is.

Hits from the album have been flooding in; with “Love Me Like You Do” featuring on the movie soundtrack of “Fifty Shades of Grey” earlier in 2015.  Fortunately, Goulding is not associated with this connection alone; her exceptional collaboration with Scottish DJ Calvin Harris “Outside”  features on the Deluxe version of the album, and the successfully received “On My Mind” ,  Delirium is already gearing up to be Goulding’s most popular album.

By transcending in a different direction, Goulding is set to captivate a wider audience than perhaps her previous albums have allowed .The outstanding depth to her voice, and noticeable care and precision spent on each track is evident.  However, one might be of the opinion the tracks are so popular, so polished, Goulding at times loses her individuality by appearing to succumb to the pressures of a mainstream pop artist, both visually and vocally.  I am actually not of that opinion. Each and every track on “Delirium” has the potential and strength to be a hit single. The album shows growth as an artist; with the ability to turn her hand at a wide genre of musical classes, Goulding appears to be flexing her talent, showing the listener this is perhaps just the beginning. Of course, die hard fans will recognise this album is significantly different to what Goulding has released previously, but isn’t that kind of the point?

Delirium in a nutshell: Charismatic, charming, exceedingly catchy. With upbeat tracks such as “Keep On Dancing” giving nod to the Diplo/Major Lazer influence, melded in with the smoother vocals on “The Greatest” and “Paradise”, you will be hard pressed to not find a track on this album you like. Working with Max Martin, Greg Kurstin, One Republic’s Ryan Tedder, Klas Ahlund and Disclosure’s Guy Lawrence, alongside writing partner Jim Eliot, it is clear extensive polishing and a bloody lot of hard graft has went in to completing this alluring compilation of Goulding’s vocal ability. Delivering 22 songs on the deluxe version amounting to just under 80 minutes, you most certainly are getting your money’s worth of tracks.

To sum up with a  line from ‘Don’t Panic’: “I got big dreams baby, so don’t you overcomplicate it”, Ellie Goulding IS dreaming big, and sure to be flying high with her latest album, and upcoming tour.

Goulding has announced details of a UK Arena tour and will perform in 10 cities, beginning on March 8th 2016.