I suspect the member of El Goodo meet up weekly at their hideout in the Welsh Valleys and set themselves challenges:

“What if Del Shannon sang a Tremeloes song?”

“What if the Beach Boys tried to write an ELO song?”

Tonight in Oporto, they regale us with a set mostly drawn from last September’s album and their deep knowledge and love for the sixties is ever-present. It’s not a pastiche or altered covers – these songs sound like they were just written in a parallel universe where the sixties never ended. Not obviously a live band, the front line of three guitars spend a lot of time looking down at the frets, focussing on the detailed arrangements and I suspect at least one of the band would rather be in a studio. Despite this, the set is technically impressive and the extended solos and jamming sections towards the end are impressive. 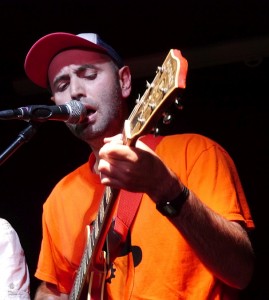 The sole member who is able to talk is hardly chatty but has a lovely voice in the higher registers and leads some solid harmony work. The bassist is solid and groovy and there are keys and drums too, making six members on a tiny stage. They open on an anti-war song – so far, so sixties. Susan Bill sounds like a sweet early seventies Beach Boys ballad, others recalls The Shondells, while Lay It On My Honey could be a Help!-era Beatles rock and roll track. I Hadn’t Seen It Coming has shades of The Hollies and the whole is a delight for those playing spot-the-influence. 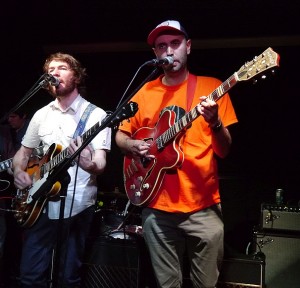 This was a very retro set, just as expected and full of sounds from the early sixties Beat Explosion. No-one was surprised but I don’t think anyone was disappointed with the quality of songs and performance.