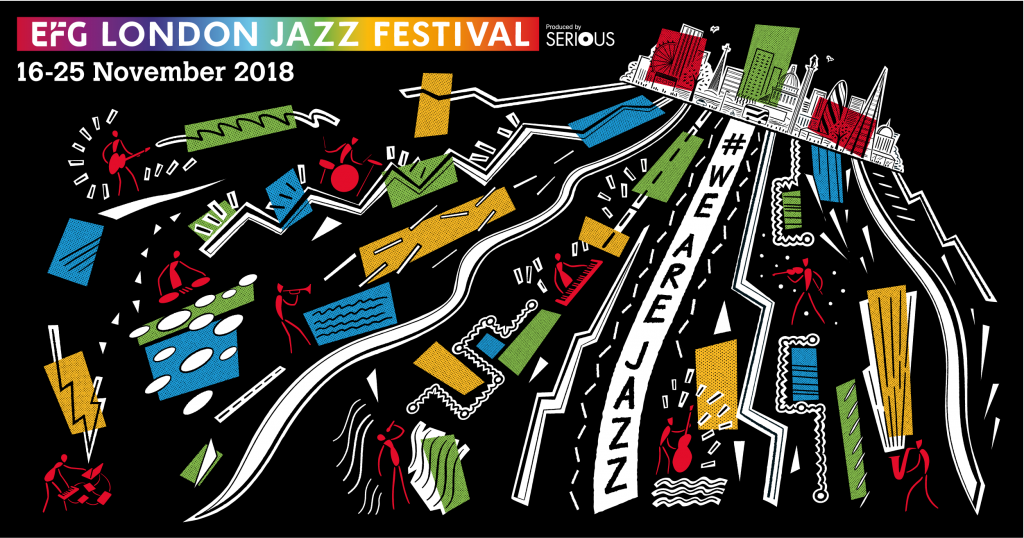 This year’s EFG London Jazz Festival (now in its 26th year) will run between November 16-25, taking in over 300 performances alongside talks, films and free events across over 70 London venues. This year’s programme will include performances by the hotly tipped Nubya Garcia, Kandace Springs, Jeff Goldblum (yes you read that right – a talented jazz pianist, Jeff’s debut album is due later this year), Zara McFarlane, Mr Jukes, Abdullah Ibrahim and Lea DeLaria (know to most of us as Orange Is The New Black‘s ‘Big Boo’).

The festival will also include Anthony Joseph’s celebration of the UK’s Caribbean diaspora, ‘Windrush: A Celebration’, and a tribute to the musical life of Hugh Masekela. This year’s EFG London Festival will launch on November 16 with its signature gala performance, Jazz Voice, which this year features the likes of Zara McFarlane, Anthony Joseph, Lea DeLaria and Lisa Stansfield amongst others.

The EFG London Jazz Festival opens on 16 November with its signature glittering gala performance, Jazz Voice, where Guy Barker’s 42-piece orchestra teams up with some of today’s most individual vocalists in a spectacular celebration of song, hosted by Jumoké Fashola.   This year’s line-up includes Laila Biali, Allan Harris, Deva Mahal, Anthony Strong, Zara McFarlane and Lisa Stansfield, with further names to be announced.

Jazz giants this year include Archie Shepp and Abdullah Ibrahim and Ekaya and there is a special concert, The Boy’s Doin’ It, in celebration of the life and music of Hugh Masekela.   The list of international stars continues with Bill Frisell, Lea DeLaria, Madeleine Peyroux, Dave Douglas, Avishai Cohen, Myra Melford, Bugge Wesseltoft, Kandace Springs, Ethan Iverson, Melody Gardot, Tord Gustavsen, Youn Sun Nah and a rare opportunity to see Hollywood star Jeff Goldblum on piano, with his band, The Mildred Snitzer Orchestra.

There is much within the festival that reflects the global language of jazz and music that reacts to our changing world:  Iraqi/American trumpeter Amir ElSaffar’s Rivers of Sound Orchestra comes to the UK for the first time, exploring the juncture between jazz and the Middle East; Ian Shaw’s concert with the Citizens of the World Choir brings together a group of refugees, asylum seekers and campaigners.

British talent is celebrated: saxophonist and leading force in the new wave of UK jazz, Nubya Garcia, performs a double headliner with drummer Makaya McCraven, a key new figure in the Chicago jazz scene and rising stars, Camilla George and Sarah Tandy, perform together and, for a perfect showcase of the next generation of British jazz, the festival will host the BBC Young Jazz Musician 2018 Final.

The EFG London Jazz Festival brings together musicians from across the planet, aiming to promote the love of jazz and reach as wide an audience as possible.   This inclusivity is reflected in the Festival’s digital marketing with #WeAreJazz, which allows festival-goers to follow news and share memories, promoting diversity and the engagement with jazz by the broadest of audiences.

Now in its 26th year it remains the capital’s largest city-wide festival, with over 2,000 artists in more than 325 performances in concert halls, clubs, at family events, free concerts, films and talks, in over 70 venues across London.

The EFG London Jazz Festival is produced by Serious, one of the UK’s leading producers and curators of live jazz, international and new music. Serious produces events that range from major concerts, festivals and national and international tours through to learning and participation programmes, conferences and specially commissioned bespoke events. Alongside its core role as a live music events producer, and programme consultants, it works in artist and rights management. Parallel to this exists the registered charity, Serious Trust, which has been established to support the next generation of artists and audiences through our artist development, learning and participation and commissioning programmes.  serious.org.uk

The EFG London Jazz Festival was created by live international music producers, Serious. The Festival emerged from the long-standing Camden Jazz Week which was created in 1970; with the active support of the London Arts Board (now Arts Council England, London). Serious – who had for some years produced the Camden Jazz Week, engineered a transition that saw the evolution of the Festival. Taking a mix of international and British artists and a commitment to education activity, the London Jazz Festival began to spread its wings. The aims of the Festival still remain the same today; celebrating the place of jazz in a city which is at ease with its rich cultural diversity, and drawing in a multitude of venues across London who present the music, week in, week out, throughout the year.