In a hugely repetitive and churning festival of the riff, Earth celebrate the glory of banging on as few chord changes as possible, as slowly as possible. So slowly, in fact, that the drummer, Adrienne Davies, throws in silent beats between every hit of the sticks, just to keep time – tish, bang, arms above head, pause, tish, bang and repeat. That might sound dull but it goes into a whole other level of doom psychedelia. Zen meditation has a teaching: if something seems boring for 5 minutes, try it for an hour instead. Dylan Carlson has focussed on taking what seems to be incredibly simple and doing it over and over until tiny changes come into focus. Bits of noodling take on serious significance in the discipline of repetition. 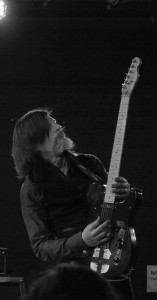 Tonight in the Brudenell Social Club, men gaze seriously in silence, some nodding their heads, as the band spin just over half a dozen tracks out over an hour and a quarter. Whereas the last album was, by Earth standards, practically a pop set, with guest vocalists and additional guitars, this is straight guitar, bass and drums. Dylan cradles, strokes and loves his guitar as he conjures loud riffs and feedback from its pick-ups. Incongruously, the instrument boasts a 3 Lions George’s cross and a corny sticker about Faeries. The band are not quite what you’d expect. Dylan isn’t a large growly man, like the music alone might lead you to expect. Lightly nasally-voiced, he is almost chatty and introduces each track. Those tracks draw from a range of albums, including the ominous There Is A Serpent Coming, from the new one, shorn of the dressing up it gets on disc. Others include Badger’s Bane, Even Hell Has Its Heroes, Old Black and Torn By The Fox Of The Crescent Moon. Titles like And The Bees Made Honey In The Lion’s Skull and The Ouroboros Is Broken betray hippy psychedelic roots shared with Grateful Dead songs, themselves fans of entering another state through the musical long-form. 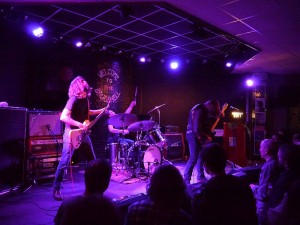 Erath’s dirge-offering, moving at the speed of tectonic plates, underpinned by Don McGreevy’s thrusting bass, creates a different mindspace and offers an alternative to the pursuit of novelty; if you find a riff you like, why not stick to it? 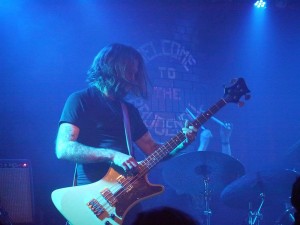