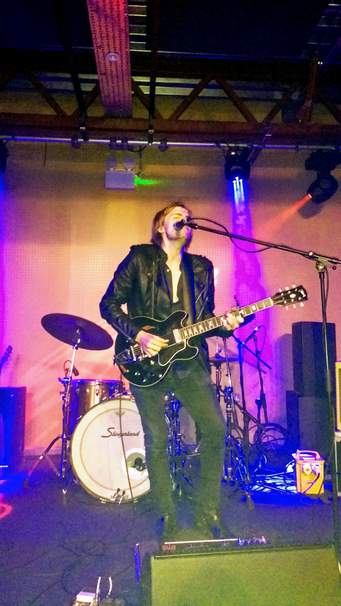 Midway through Dylan LeBlanc’s gig in Leeds’ Brudenell Social Club, the band left the stage as Dylan changed guitars and told us that he would be playing a few solo acoustic songs from his lesser-known first album Pauper’s Field which, in his own words, “no one bought”.

So I felt a slight tinge of pride well up inside me, albeit slightly dampened by the knowledge that I had not actually bought it per se, but swiftly justified by the surety that irrespective of how the album was acquired, its very acquisition led to me being there at that very moment supporting him. Although also in possession of his second album, his first is the only album I properly know, and it shaped my expectations for the performance I was to witness. This mid-set acoustic interlude, complete with cello, was a perfect representation of my expectations: intimate setting, small venue, soft nasal voice accompanying delicate fingerpicking, all accentuated by the cello. And these expectations were easily met during that three song break, with gems such as “Emma Hartley” particularly standing out. But that was the exception rather than the rule, the rule being that Dylan LeBlanc and his band completely blew my expectations out of the water, and then some.

My friend and I lamented a few times that we couldn’t hear much of the cellist, nor particularly much of the keyboardist sometimes. And whilst this was indeed a shame, it was due to a very simple explanation: the power of the core guitars-bass-drums triangle. Rarely have I heard such force and intensity emanating from any stage, let alone what seemed like the venue’s ugly little duckling stage, in the secondary “Community Room”. The sound was more akin to another North American rocker, the name of which I glimpsed in the programme notes and to whom he’s apparently oft been compared: Neil Young.

Either Dylan’s third album is slightly heavier than the two I have, or they tend to liven things up – considerably – during live performances. I think it’s some of the former and a lot of the latter. They opened up with what I felt was a regular Dylan LeBlanc song: starting out folkily with gentle instrumentation mixing and winding their sounds around each other and steadily building through the choruses and bridge. But instead of the gentle ending I expected to come, it built further and further until a thunderous climactic explosion of furious guitar swirls, a wall of sound perforated by the duelling guitar solos of Dylan and his lead guitarist. By the third time they were jamming away into oblivion, the subtle “Neil Young” name I’d skimmed over came to mind and steadily wound its way to the forefront,  sending all previous expectations out of the window and forcing me to rethink my perception of Dylan LeBlanc as a mere folky singer-songwriter of beautiful love songs. Stomping his way around as much of the small stage as he could (cue appraising nods of approval of his balance), dusty blond hair swinging back and forth with blistering solos and some heavy guitar-pounding, my ears were gleefully blasted– don’t try this at home kids, or anywhere – in sheer pleasure at their jamming prowess.

The variation in calm and heavy numbers was just about right, with old songs I recognised like “If The Creek Don’t Rise” or the wistful cello-highlighted “Part One: The End” providing the calm, and newer songs I knew not of more often than not supplying the heaviness. The set was punctuated with some most welcome casual band banter showing off proper camaraderie and friendship in their relaxed between-songs demeanour and precise synergy in their intense playing. Dylan also grew into the gig and his role as bandleader as he opened up and chatted a bit more, proving to be both casual, charming and funny enough to hold his own in front of an admittedly easy-going audience, and he shared various stories about  his life and his songs. The whole performance was a very solid and extremely satisfying blend of his music, set in a cosy venue and leaving me with no doubt to return to see them again.

As the encore came about, I realised I’d conveniently dodged a spoiler of sorts in forgetting that Dylan sometimes included Neil Young covers in his setlist. But with a ringing sound in my ears as I left the venue, I was fully content with the lack of covers, having had my Youngesque fill through this southern man and having possibly found a younger alternative to the Canadian legend in the rock’n’rolling folk persona that is Dylan LeBlanc.