Download Festival Preview – Part 2 – 10 acts not to be missed! 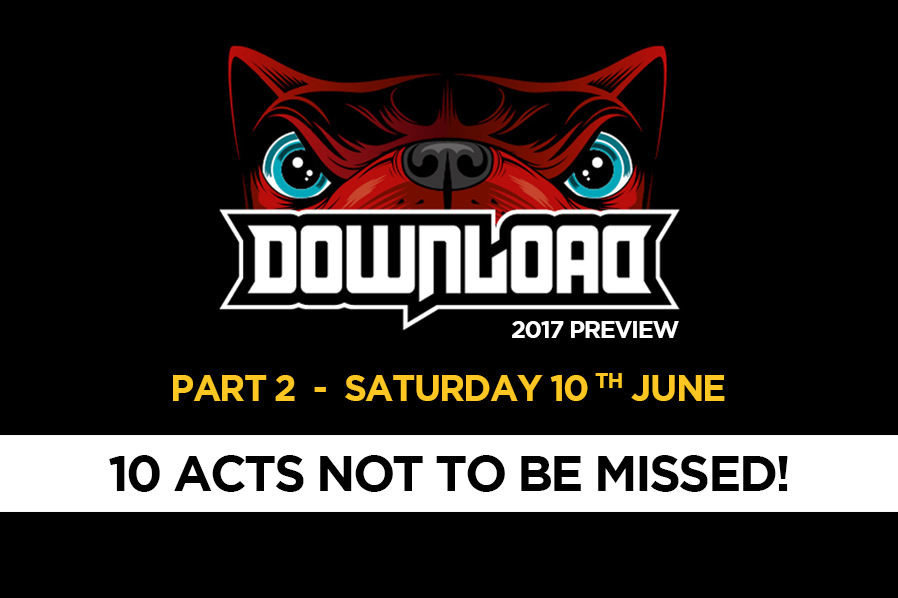 On to day two of our Download Festival top 10 acts! You’ve checked out the camp site, had a go on the ferris wheel and bought that Slayer bucket hat you’ve been lusting after since you saw it tucking into your noodles yesterday evening. Most importantly though, you know your bearings around the arena, which means you know exactly where the Dogtooth stage is to catch the first of our Top 10 bands of Download – Saturday edition!

After a hectic Friday, why not a bit of excellent Pop Punk! Junior have been on the up and up this past year after a significant touring schedule and using front man and bassist, Mark Andrews prolific pro wrestling fame to further their audience. But don’t just look at it like a one-man band, this three piece have more energy than the Duracell bunny and the infectious tunes (such as Veronica and Fall To Pieces) to go with it, which is why they’re the perfect fit to start your Download Saturday! (AJ)

Since they reformed at Download in 2014, SikTh have been rather busy. Multiple UK tours, both smaller shows and opening arenas for Slipknot, an EP release and now a brand new album releasing later this year in the form of The Future In Whose Eyes, SikTh are going to take the main stage and command you take note! With over a decade of material and a new fire lit, their mainstage debut could be, one of the performances of the weekend. (AJ)

Since they hit the scene in 2006, Pierce The Veil have toured relentlessly and worked their way to the top with their hard rock and catchy tunes, building quite the following worldwide. Make sure you check out the Californian rockers make their appearance on the mainstage, as they bring a selection of tracks from their new album ‘Misadventures’, among many other PTV bangers in a high paced, energetic show spinning the mainstage out of control! (DP)

Headlining the Avalanche stage on the Saturday is pop punk pros Simple Plan. After building a huge following playing on the vans Warped tour in 2001, Simple Plan were riding aside alongside the likes of Blink-182 and Good Charlotte after their debut release ‘No Pads, No Helmets… Just Balls’. Still going strong and with their recent pop punk masterpiece ‘Taking One For The Team’, Simple Plan will be a show full of bouncing mosh pits and plenty of trips down memory lane! (DP)

Also flying the flag for pop-punk on the Avalanche stage is Brighton’s very own As It Is. Having toured aside the likes of Sum-41 and Sleeping With Sirens, Patty Walters and co know how to throw a party. Having freshly dropped new album ‘Okay’, As It Is are fueled up and ready to pull in a few new fans with a lively set at this years Download Festival! (DP)

Every Time I Die

Every Time I Die are ferocious, powerful, charismatic and monsters of the Hardcore Punk scene. Coming off their last release, Low Teens, one of 2016’s best albums, it was inevitable that ETID would be at Download festival. The veterans are without a doubt one of the most exciting bands throughout the weekend with an incredible amount of stage presence, notably from front man Keith Buckley who treats every stage as though it’s the biggest in the world, combined with a fast paced and gnarly sound, these are your weekend workout as you will not be stood still throughout their set! (AJ)

Like many others, rock duo Greywind will also be making their debut Download performance at this year’s festival. The brother and sister act released their first ever album ‘Afterthoughts’ late last year before even playing a single live show. Inspired by the likes of Thrice and Jimmy Eat World they are full of electricity and emotion, which transfers to their live performances for a memorable show. Make sure you check them out on this years Avalanche stage before they follow the footsteps of the likes of PVRIS to become one of the best new acts around! (DP)

Elegant vocal melodies. A back catalogue so large that could rival the bible. Fart jokes. Guttural vocals. Love songs with blast beats? Yup, Devin Townsend is back at Donington Park as the main support to Rob Zombie on the Zippo Encore stage. Devin and his band of merry men have been a unit for well over a decade now and have experienced almost everything there is to experience, including multiple world tours, playing incredibly famous venues and notably selling out the Royal Albert Hall in London. They are guaranteed to give one of the most dynamic and best performances of the weekend, so make sure you are there, Poozers and Ziltoids in hand with a neck brace for head banging and tissues for the soft sing-alongs. (AJ)

A Day To Remember

One of the main stage’s liveliest acts of the weekend would be the appropriately named A Day To Remember! With their combination of metalcore and pop punk madness these guys are ruthless live and bring so much more to their set than just the music. Expect explosive surprises as well as plenty of crowd-surfers and circle pits to the likes of ‘Right Back At It Again’, ‘All I Want’, ‘All Signs Point To Lauderdale’ and a bag full of other belting tracks for the bands 14 year strong career, including the recent album release ‘Bad Vibrations’! Whatever you do this weekend, do not miss this A Day To Remember! (DP)

Without a doubt, one of the most refreshing headliners in years, Biffy Clyro are set to finish off the mainstage on Saturday. Stamping their name next to other Saturday headline legends such as Metallica, Rage Against The Machine and Black Sabbath, Biffy Clyro are more than equipped to dominate and give arguably, one of the most memorable Download performances of the decade. After being heavily criticized for past headliners, to have Biffy Clyro headline for the first time is rather cataclysmic, as it proves there will always be opportunities for British bands to follow in the footsteps of Maiden and Sabbath and where else is better than the hallowed Donington park? After the release of their last album, Ellipsis, Biffy Clyro have charted, played a near sold out UK arena tour, as well as a very successful US tour and will bring fury and Scottish charm to the festival main stage. Watch out for possibly some older, classic Biffy to appease the heavier crowd, such as There Is No Such Thing As A Jaggy Snake, Toys Toys Toys and Eradicate The Doubt (or at least we hope!). (AJ)