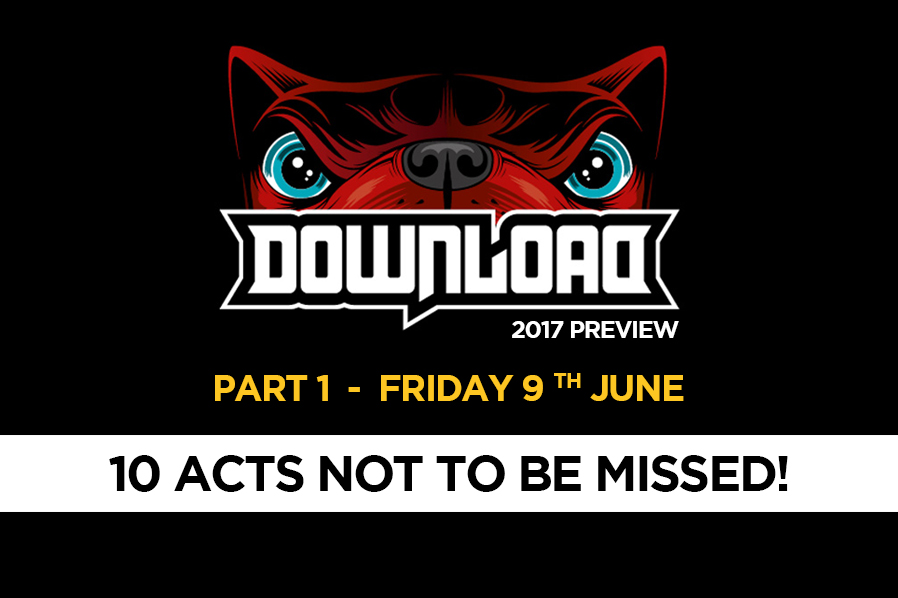 Download festival 2017 is rapidly approaching, and with four stages crammed with awesome bands and a little bit of NXT thrown on top it’s set to be an incredible weekend to kick off the summer! With over 100 acts to choose from we thought we would give you a helping hand with our top 10 acts not to be missed on the opening day of Download Festival!

We kick off our Friday suggestions with one of the hottest new bands of 2017! Holding Absence is a melodic, post-hardcore five piece out to prove a point. After the release of two debut singles in quick succession, Dream Of Me and Permanent, the Welsh five piece have been non stop touring this past year, developing their live performances and building a loyal fan base fast! You can catch them bright and early on the Dogtooth stage! (AJ)

A stone’s throw from the Dogtooth stage, you can find our next band! Opening the mainstage for the weekends antics are one of Australia’s heaviest exports, Northlane. After a hectic 2016 touring, they still had time to write and record a surprise release record in the form of Mesmer! If you want a heavy and hard-hitting start to the day with more ups and downs then the Ferris wheel in the main arena, Northlane are your go too! (AJ)

Making their debut Download Festival performance on this years Avalanche stage is Atlanta’s very own Issues. Known for their Nu Metal and DJent rhythms the bands liver performances are full of opportunities to get moshing. Having released their fantastic second album ‘Headspace’ last year, the band are geared up and ready to tear through Donwload Festival as part of this fantastic album cycle! (DP)

Headlining the Avalanche stage is Florida alternative rock suit Sleeping With Sirens. Formed in 2009, SWS have built a dedicated fan base through their emotional, authentic and raw music, and are bound to fill the Avalanche stage with a chaotic crowd singing Kellin Quinn’s intimate lyrics right back at them. Expect a roller-coaster show full of fun, emotion and energy! (DP)

Arguably, the heaviest band of the day and you will hear them before you see them, but you can catch Code Orange on the Avalanche Stage, tearing up the tent. After releasing their latest album, Forever, early this year, the Pittsburgh quartet have been on the path of destruction, most notably being announced as main support for headliners, System Of A Down, so the must be doing something right! Go and get your mind blown and witness the most unique performance of the day! (AJ)

After a day of heavy, you need a little bit of something more upbeat, something with a bit more of a sing along chorus. Pop Punk royalty Four Year Strong are more than happy to supply that! With a back catalogue spanning over seven records and a decades worth of performances, this Download performance being part of their ten year anniversary tour, they know exactly how to get you to dance, sing and have a jolly good time. Coming fresh off of a sold out US tour, they will be raring to go and to dominate the festival crowds, come rain or shine (not that it matters much, they’re in the Avalanche tent)! (AJ)

Prepare for a blast from the past with Good Charlotte! Having returned from hiatus in 2015, the Maryland rockers have been busy touring the world with their recent long awaited album ‘Youth Authority’. Next up is a return to the UK for their appearance at Download Festival armed with their arsenal of pop-punk anthems to bring to the party at the Zippo Encore stage! (DP)

If you’ve survived Good Charlotte set with the urge for more pop-punk madness, Sum-41 will make sure you’re really put to the test. Sum-41 have also returned from their longest break from music with a blistering new album in the form of ‘Voices’ released late last year. Expect an all killer, and plenty of filler set to close off the night in true pop-punk style! (DP)

Who else but Mastodon? Masters and one of the leading bands of the progressive metal community over the past fifteen years, Mastodon are no strangers to the Download mainstage after appearing in 2013. 2017 sees the release of the bands ninth studio album, Emperor Of Sand, so expect a bit of new stuff to crop up in their set, but expect a powerful, aggressive and seismic performance as the Georgian quartet ravage the main stage! (AJ)

System Of A Down

Friday night’s ultimate headliners are no other than System Of A Down. Having headlined the festival in 2005 and 2011, SOAD are no strangers to handling the mammoth main stage crowd at Donington Park. They will be sure to set the bar high for this years headliners to follow up. With tracks such as ‘Toxicity’, ‘B.Y.O.B.’ and ‘Chop Suey!’ mixed into a setlist of high energy metal madness, it’s set to be a one of the performances of the weekend! (DP)