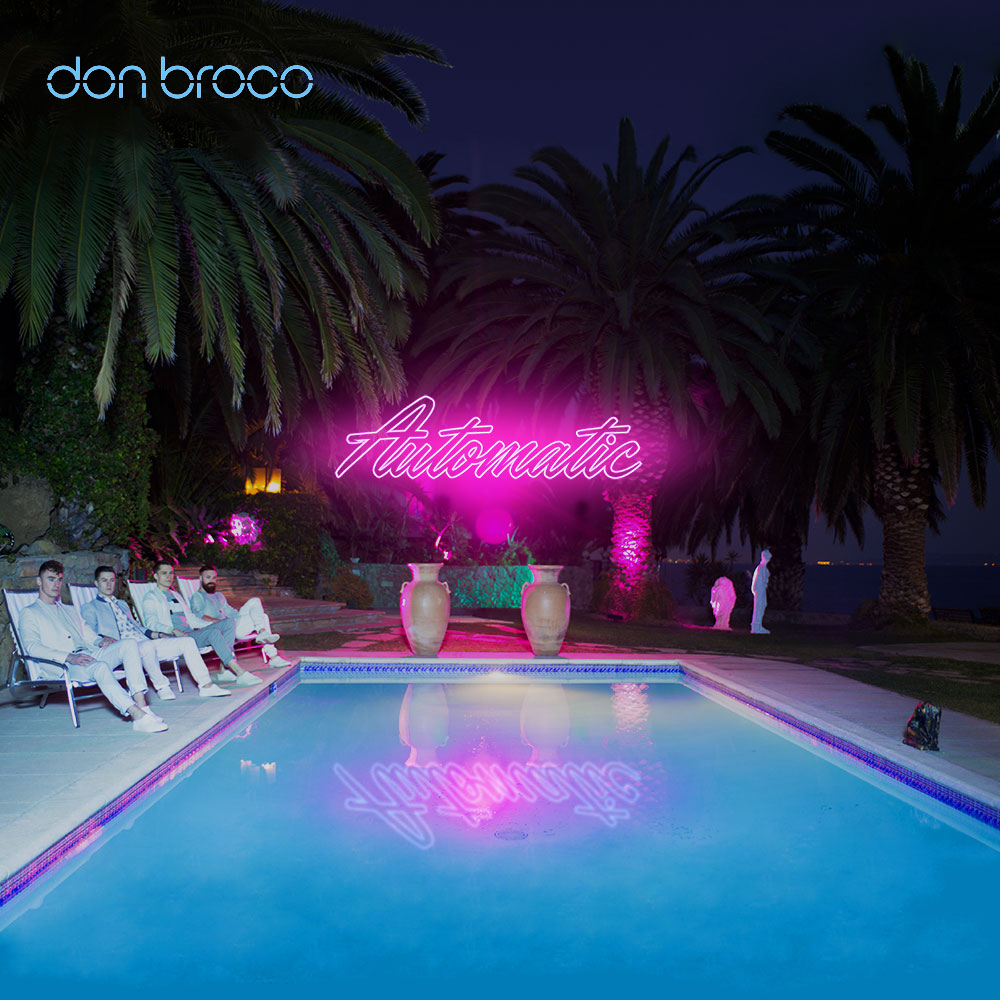 Following a debut album like ‘Priorites’ was never going to be an easy feat. Almost exactly 3 years to the day ‘Automatic‘ releases on August 7th. The Bedford bad lads have occupied themselves putting on energetic shows up and down the UK including appearances at Reading and Leeds festival on the main stage.
When it comes to a second album, there’s always a danger of falling flat on your face after a successful introduction. Don Broco have managed to change the mould, as per usual. A band that does nothing by the book anyway. Unique style, music and attitude to match. Never have I met a band that are as genuinely as forthcoming, fun loving and friendly as these gentlemen.

Trying to describe the style of ‘Automatic’ isn’t the easiest thing I’ve ever been challenged with, however, I’ve decided that ‘Funk Metal’ is what I’m going to charge them with. The sentence being to never stop making music. You can tell the process has been different this time round having worked with record producer, Jason Perry (McFly, McBusted, The Blackout and Kids in Glass Houses) on this record the taste of pop settles in your mouth in the most satisfying way.

We begin the album with ‘Superlove’. Think the 70’s meets Kerrang, meets Camden Town – Flamboyant, emphatic and stylish. Funk Metal at it’s most clear. The chorus is a falsetto filled fun fest with front man Rob Damiani and drummer Matt Donnelly belting “Superlove” that is as catchy as it intends to be. If you haven’t seen the video for this song, it is an absolute must. The seamless threading of one long dinner table will have you falling in love with this band. I’m just glad I didn’t get stuck with that bill.

Once again we step into our dancing shoes with title track ‘Automatic’. A song that immediately begs for the listener to get off their rear-ends and move. Another huge chorus that I can assure, from experience, has an audience shaking their tail-feathers with reckless abandon. A genuinely fantastic song that I can easily see creeping it’s way up the charts with the right marketing.

‘What You Do To Me’ falls into the fray with Simon Delaney’s acoustic guitar setting the tone. This song really has it’s own personality, patient rage is all that I can muster. Settling in the verses to catch your breath and ferociously fighting it’s way to the surface in the chorus. It’s easy to tell Don Broco have their live shows in mind when writing, each song has on of those pit drop moments.
To think that this album could heat up any more might have been naive. It’s absolutely not. ‘Fire’ is full of passion and gusto, and is a ready made crowd favourite. Another song that is ready to be belted out on tour with the masses joining with voices at top volume. Having headlined the Kerrang Tour, previously headlined by the likes of Biffy Clyro, I don’t think I’d be out of place to suggest Don Broco were on their way to some incredible heights.

We bring down the energy and tap into our emotional side with ‘Nerve’. We’re breaking into the ballad side of Don Broco, a side we definitely haven’t seen in the past. Including a considered guitar solo from Si. Big vocals and a full sound-space proves how well matched Broco and Jason Perry were for this record.

In ‘Let You Get Away’ we get hints of Don Broco’s alter-ego ‘Club Sex’ that the gentlemen use to create electronic remixes of their own tunes. It’s also so good to see the utilisation of ‘Donnelly’s vocals for an extra level to those chorus’s. Tom Doyle (Bassist) was fresh to Don Broco’s writing process this time round and it’s refreshing to hear his bass resonating in the middle 8 of this tune.

Hint’s of Guns & Roses flicker at the beginning of ‘I Got Sick’ Si’s guitar tone has come leaps and bounds since ‘Priorities’ the most important factor being variety. There’s real summer feeling to this song with the overdrive tone feeling very USA meet Don Broco. I’m endlessly impressed with this album and the maturity within the writing.

Don’t forget. This is Funk Metal, the anthemic rhythmic vibe makes for one of the most unique albums I’ve had the pleasure of listening to in a long time. ‘Keep On Pushing’ is almost encouragement towards the end of the album. Not like I need it. At this point I’m just gutted the album is only 10 songs long. The range and personality in Rob Damiani’s voice is a huge part of Don Broco. He is in a league of his own, not necessarily for his range or crazy scale runs or riffs. It’s about what he achieves in terms of telling a story in his vocal tone.

‘Tough On You’ brings that ‘Club Sex’ feeling back to the surface and drives us through the chorus wall once more. If there’s one thing to take away from this album – Don Broco can’t half write a chorus.

I’m reluctant to listen to final tune ‘Further’, however, once I have I can just start it all. ‘Further’ feels like a little ritornello to ‘Priorities’ within the verses, the fast-paced, wordy flavour takes me back to 2012. I’m then launched into 2015 with a smile on my face. The chorus feels like the Broco bad lads have been listening to some Biffy Clyro and layered over some Don Broco vocals. Layers for days make this song a perfect ending that is polished and refined yet emotional and raw.
These days, there’s a lot of music that sounds incredibly similar. Don Broco aren’t just in a league of their own, but they start a whole new conversation.

You can pre-order ‘Automatic’ now. It comes out on the 7th of August.