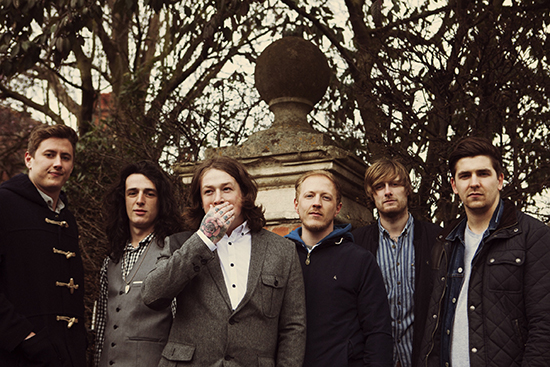 Walking to the venue I conversed with my brother about just how excited I was for this gig. My elation swelled as I entered the venue and saw The Maine’s backdrop, forgetting there were two bands to get through before Deaf Havana took to the stage. Having said ‘get through’ my impatient sentiments couldn’t have been more wrong.

A band who I had heard the name of but never listened to take to the stage, and my word was I taken back. The People the Poet, a 5 piece folk rock band that have a Mumford and Sons, Elbow and Kings of Leon flavour to their overall taste.

This band genuinely blew me away. The effortless vocals paired with the immaculate musicianship created a blend that had me smiling in disbelief that I had never heard their music before.

The addition of the female singer to the front line also gave TPTP a Van Morrison and Linda Gail Lewis feel. The combination of their vocals meshed like a warm cider on a winter’s eve. The front man had passion and soul in his voice that could light a fire, while the girl could blossom a tree with her delicate harmonic additions. The band have wrote their songs using stories they have collected from friends, fans and family, which gave a wonderful twist to their music.

One music collection changing set later and I was full of energy.

The changeover began and the crowd became restless for The Maine, who were top support that evening. The Maine are a band hailing all the way from Arizona and with a huge following they had some obvious fans in the crowd.

They kick their set off with gusto and power through despite what I felt were some bad levelling issues on the microphones. The front man John O’Callaghan commanding the crowd with bona fide swagger. An old school front man that had the crowd eating out of the palm of his hand. The band seem to have a great range within their set from hard rock to American country rock they had depth and were fantastically well rounded. During the final song the whole crowd was joining in and the room was buzzing. A great set all in all.

The moment was upon me, a moment I had waited for years. The band’s name in lights in front of me and my heart was pounding. They walked on to a raucous cheer and smiles were on the faces of everyone in the room. A collective sense of elation filled the O2 Academy.

‘Lights’ from their current album ‘Old Souls’ opened up their set and had me moving like a buffoon straightaway. The effort that has gone into this band shines through as I can’t help but have goosebumps throughout. It’s so clear that the additions of Matt Veck-Gilodi and Max Britton have bolstered the live sound and they have honed that over the past few years. James Veck-Gilodi vocals kick in and the show is on.

The whole venue is a cocktail of dancing, singing, smiling and all round partying throughout ‘Everybody’s Dancing’, old favourite ‘Smiles All Round’ and new single ‘22’ (that’s video had been released the week before).

‘Mostly, I’m a bore’ gets a huge reaction as we go into a stint of songs from ‘Fools and Worthless Liars’, the whole room is ablaze in song as we oblige to the standard top of our voice ‘woah’ chants along to ‘I Will Try’. James, front man of Deaf Havana, acknowledges just how awesome the crowd is and tells us about how he’s been struggling recently. Having been in America he’d been asking himself whether it’s all worth it, but assured the crowd that moments like these rekindle his passion and desire to continue.

We’re reminded that we are in Yorkshire by a hearty “YORKSHIRE” chant as we move into a virtuoso vocal demonstration from James in ‘Leeches’. His dynamic range flows effortlessly with power, control and attention to detail. As lead vocalists go these days, I would put James in the top 10 of all bands currently. His natural ability leaves his options endless.

Other past favourites from ‘Fools and Worthless Liars’; ‘Little White Lies’ and ‘The Past Six Years’ continue the sing-along nature that has been this gig.

The fluidity of the bands set has to be noted, barely a moment to take a breath between each left me shattered but wanting more. How the band kept the energy up for as long as they did is a testament to how much they love what they do.

‘Night Drives’, a song James’ girlfriend wrote for the band brings the mood to a welcomed serene atmosphere. You could tell how engrossed the crowd was as they sat back and enjoyed the ride. We have gone from party to patient in seconds.

The show continues and I find myself musing at just how good Deaf Havana are live, a band that prides themselves on playing live instruments with no gimmicks.

The set comes to a close after ‘Mildred (Lost a Friend)’ and the crowd are having none of it. “WE WANT MORE” chants ring out giving the lads their encore shout before they’ve even got off the stage.

They come back on with ‘The World or Nothing’ followed by ‘Nicotine and Alcohol…’ and finally on to one of my genuine favourite songs of all time: ‘Caro Padre’. A song that has the most fantastic musicianship, vocal demonstration and lyrics. They finish the show how they started, by giving me goosebumps.

What a performance, they take their leave and the venue empties. If this band are near you this summer, you’d be a fool not to check them out.