Danny has tweaked the sound and the line-up to match his current double album (Brilliant Light). Much less of the pedal steel and occasional sax, much more jamming guitars. The pedal steel is there but not generally high in the mix. Instead we get lots of scorching guitar, plenty of duelling guitar and songs stretched out. Tonight’s lengthy 105 minute set sees songs at an average of six minutes a piece, stretching out while Danny and co enjoy the groove. 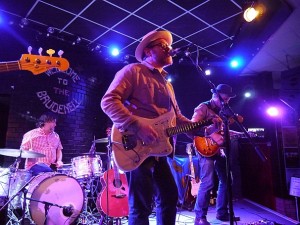 The colour is still underpinned with organ and pedal steel but the sound is more rock and at times I think of that seventies institution, The Band. Danny Wilson is an institution and has turned out affecting rock-soul with an Americana tilt for years but in the six years I’ve been seeing him his audiences have grown little and it’s a crying shame. Those that know him, love him and there are folk who are going to multiple dates on this tour. Danny has a chat about that and some quality banter about all sorts of things over the evening. There’s a bit of the East London wide boy in his patter and the Yorkshire audience warms to it. He swaps quips about shirts, swapping clothes, his habit of saying “awight?” after every song, all kinds of pub yatter. There’s also more than a hint of the blue-collar songs that Springsteen loves to write. He’s more than aware of the frequent comparisons us lazy writers make and, after a woman from the audience jumps on stage to dance, he leads the band into an impromptu and improvised Dancing In The Dark. 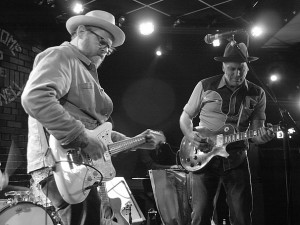 Much of the set is drawn from the new album and Danny knows it won’t phase his fans to open with three songs from it, all very strong and with Consider Me spelling out the guitar-led sound he is working with at the moment. It helps that he is incapable of writing a song without a solid tune and the melody and energy carries us along with the band. There are of course some old favourites, they are saved for the end – songs like Never Stop Building That Old Space Rocket, Stay True and Every Beat Of My Heart. Somehow the band sustains a lengthy set of new material by playing intensely, allowing songs to jam and squeezing each tune for its full flavour. Always a great live act, the current incarnation of Danny and the Champions of the World is more than worth an evening of your time. 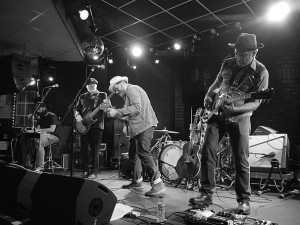 Our review of the new album is here: