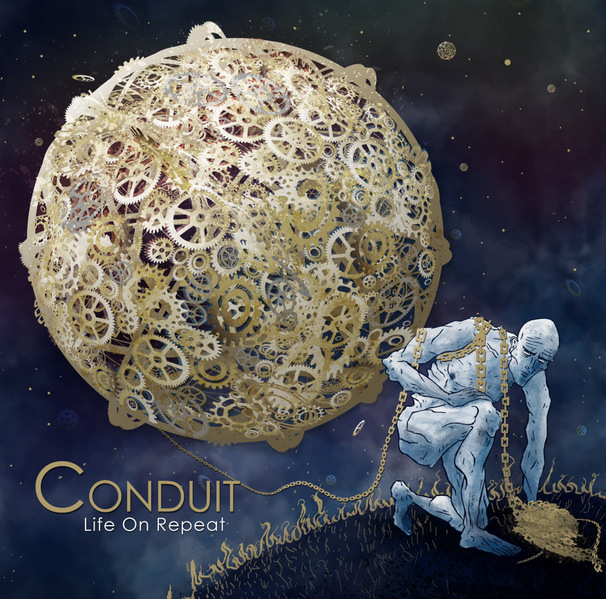 Coventry crew Conduit release their debut album Life On Repeat on June the first, – after being a band for six years. Conduit straddle a line somewhere between Post-Hardcore and Melodic Hardcore. It’s quite clear that Conduit have put their all into this record. In short Life On Repeat is a varied and interesting album which showcases a wide array of influences, their blend of aggression and melody isn’t unexpected in a post-hardcore outfit, however the band manage to keep the record sounding fresh and interesting.

The album art is also quite striking and memorable.

The opening track Eyes Wide Shut is a prime example of how Conduit manages to dance around the expectations of the listeners, every time the track moves towards being repetitive or predictable it changes direction entirely – it manages to keep things fresh and exciting while still holding on to something familiar. This is true for the majority of the album.

Familiar and Fresh may be a bit of an oxymoron but it is an excellent description of the track Outstretched Arms which is a reworking of an old single, it is really interesting to listen to the new version alongside the old and is a brilliant way to see the development of the band as a whole.

As demonstrated through the tracks Sovereign and Let Your Breath Become Your Sound the four-piece tackle the aggressive punk-aligned side of Post-hardcore particularly well, the guitars in these tracks weave in and out of each other creating a crushing sense of weight to them, the breakdowns are heavy.

On the flip side to this are tracks such as The Road, Interlude, and Pulled From The Water which are on the lighter side of things, (despite the screaming) the former has a hook that wouldn’t be out of place for a pop punk band – although the song still has a metal tinged heavy edge in places. The layerings of clean and unclean vocals throughout the album are implemented very well, both vocal styles are done really well.

The album drags in places, although not often enough to take away from the album as a whole, Conduit are much better when they’re trying to be fast paced and energetic rather than slow and soulful, that is not to say that they can’t pull off the melodic aspects – on the contrary they’re quite good at them. Life on Repeat shines most when combining the heavy and soft aspects of the sound.

The bottom line is: Conduit have released a very strong debut which combines the heavy and melodic aspects of their sound quite well. Life on Repeat is an exciting and unpredictable album and if Conduit continue on like this they will become a mainstay for the British post-hardcore scene.