The Communion New Faces Tour landed in Leeds on the 22nd of April. Its rotational bill means that in different cities the four artists take turns in which slot they perform. Charlotte O.C opened the show; then Freddie Dickson; Frances and finally Tenterhook who had the headlining spot.

Just after the artists finished their sound checks we were lucky enough to have a quick chat with the lovely and charming Charlotte O.C. 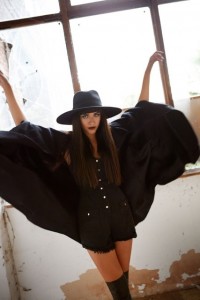 (Please note this is paraphrased)

When did you first know you wanted to dedicate your life to music?

It became a real passion when I was about five and lasted until I was around sixteen when I realised I wanted it to be a career and take it seriously.

Who are your main influences?

Alicia Keys was my first gig and it was so amazing. That’s probably where the soul side of my music came from. However, I grew up listening to Joni Mitchell, Talking Heads and Aretha Franklin to name a few. They’ve all influenced my music in different ways.

Have you ever considered going to uni? And if so what would you have studied?

I have never wanted to go to uni, never got the grades! But if I did go I’d probably studied performance or theatre, something along those lines.

What festivals have you played at?

Just got back from playing at some Australian festivals such as Field Day and Lost Paradise. Then this summer I’m playing at the Secret Garden Party, Bestival and Tramlines which will be amazing.

…and what would be your dream festival to headline?

Got to be Glastonbury!

Her set was very beautiful and her voice is incredibly ethereal. It fitted in perfectly with the rather small and dimly lit back room of Brudenell Social Club. The stage was barely raised of the ground making the situation even more intimate. Charlotte O.C’s If My House Was Burning and On&On stick out as perfectly showing off her voice and vocal range.

Following Charlotte O.C was Freddie Dickson who gave an incredibly soulful and heartfelt performance. The small crowd swayed along to his somewhat melancholy performance. He did not really engage with the audience in the same way as the other artists but this aloof approach combined perfectly with his theatrical moody performance.

Frances brought some beautiful piano lead music to the stage next. Her charming singer-songwriter persona was vibrant, think Sarah Barellies meets London Grammar. Frances nervously chatted to the small audience by chatting about how glad she was to be up North in Leeds and proceeded to dedicate her song, Red Thunder, to one of her friends who had come along to support her.

The evening came to a close with the hugely talented Tenterhook whose soft guitar music was inextricable with a soft electronic feel. His latest song, What I Like, was in many ways a highlight of the evening as it allowed the audience to be disclosed to his newest music (the music video was only released 2 days prior so seeing a liv version was a privilege!) Tenterhook definitely exuded confidence and cool making him the perfect headliner for a wonderful evening.

The New Faces Tour was a thoroughly enjoyable evening and although the audience consisted mainly of students it is something people who enjoy different genres and of all ages should attend. It is an exceptional way to see some fantastic live performers before they are performing in massive arenas! 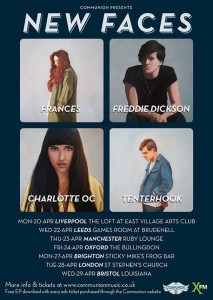