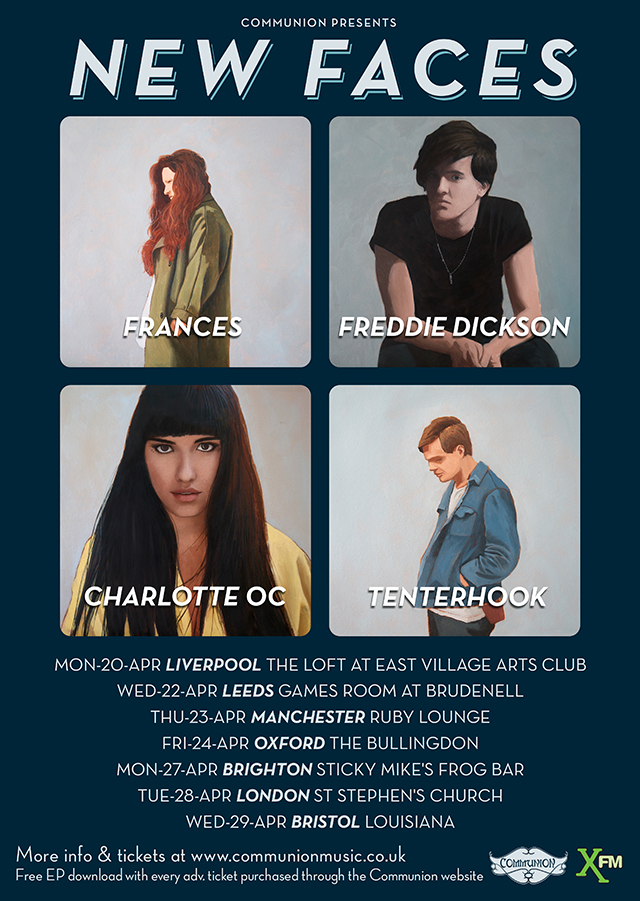 Communion, the respected independent promoter and label, is proud to announce the third installment of its biannual ‘New Faces’ tour. The tour takes place across the UK, between Monday 20th and Wednesday 29th April and visits, Liverpool, Leeds, Manchester, Oxford, Brighton, London and Bristol. The ’New Faces’ tour, which takes its name from the influential New Faces compilation album, once again features some on the UK’s most hotly tipped artists which include, Frances, Tenterhook, Charlotte OC and Freddie Dickson.

Like Communion’s long running iconic monthly new music night in West London, the multi artist bill aims to encourage fans to come and hear something new, with the emphasis on discovery.

True to format, the tour will feature a rotating bill, giving each artist a chance to headline at least one show, as well as putting the emphasis on the audience’s introduction to up-and-coming talent. This is a show where you truly want to arrive at doors and leave at curfew! Frances will be bringing forth her unique brand of ambient piano-pop, headlining both Liverpool – where she studied, and Brighton. Tenterhook aka Archie Faulks headlines Leeds and Bristol, showcasing his gloriously inventive take on indie/folk pop. Sultry and seductive singer/songwriter Charlotte OC headlines the Manchester and London legs of the tour, with Freddie Dickson headlining the Oxford date – where you can expect him to deliver an atmospheric, stadium-sized, orchestral pop show you’ll never forget.

Maz Tappuni from Communion comments, “2015 marks the second year of the Communion New Faces tour, and we’re very excited to be introducing some of our favourite up-and-coming artists to the UK. This will be the first truly rotating bill across 7 dates which further emphasises the equal billing amongst all the artists. From Charlotte OC and Freddie Dickson’s sophisticated, atmospheric pop, to Frances’ piano led, classic songwriting and Tenterhook’s disarming acoustic-guitar honesty, I can safely say audiences up and down the country will be discovering their favourite new artists this Spring”

Tickets for the tour are available for purchase now from Communion, Songkick, SeeTickets, Billetto, Gigantic and venues, priced at £9 regionally and £12 in London.

With every advance ticket purchased from MusicGlue via Communion’s site you will receive a free EP download featuring an amazing taster track from each artist on the tour.